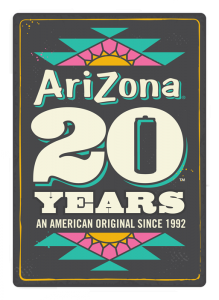 WOODBURY, NY – AriZona Beverages is proud to celebrate its 20th birthday as a successful, family owned, all-American company. From its humble beginnings in 1992, the brand has risen to become the number one ready-to-drink tea through hard work, perseverance, and most importantly, its dedicated fans. To pay homage, AriZona is asking those very same fans to design the 20th anniversary limited edition can – for the first time ever.

AriZona’s social media-driven initiative first asked fans to vote for its 20th anniversary flavor and today launches into a second phase to design its commemorative can. The winning design will be printed on over a million cans along with a QR code that fans can scan to win cool prizes.

The flavor portion of the contest began in-house at AriZona’s headquarters, where the AriZona family narrowed the choices down from five potential flavors based on all-American, classic desserts to three flavors. Open to public vote, Orange Creamsicle and Chocolate Fudge Float took second and third place to fan-favorite, Cherry Lime Rickey.

Now AriZona hands the reigns over to the loyal fans who have made the brand number one, asking them to tap into their creativity to design the new packaging for Cherry Lime Rickey. Because AriZona is known for its colorful and standout packaging, a fresh perspective is sure to result in an innovative design.

Beginning May 1st, creative mavens from around the globe can head to AriZona’s microsite, www.arizona20years.com to submit a design for the 20th anniversary can powered by Creative Allies, the leading online design community and fan engagement design contest platform. The submissions will be available for the public to view at any time and with the help of AriZona’s Design Panel, fans can view videos, commentary and opinions on all entries – in case they need a little direction in choosing their own favorites.

Submissions will be accepted until June 29th. The public can vote from July 9th through July 23rd and the winner will be announced on July 27th.

For more information on the contest, please head to www.arizona20years.com