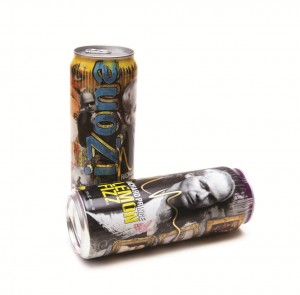 Controversy is not a word often used to describe legendary golfers and AriZona brand partners Arnold Palmer and Jack Nicklaus. No, if anything, the two men offer consumers a warm and fuzzy feeling of classic, elegant Americana and the entirely uncontroversial refreshment of iced teas and lemonades. Nevertheless, it appears that AriZona is ready celebrate the last throes of its 20th anniversary in business with a bang loud enough to have both Palmer and Nicklaus grabbing their chests, tickers aflutter. The Woodbury, NY-based company has partnered with provocative artist Richard Prince to create a new lemon-flavored drink called Lemon Fizz and packaged in a 23 oz. can partially designed by Prince himself.

Prince, a controversial artist most famous for his “re-photo” of a nude 10 year-old Brooke Shields, and his Jokes series, one that alluded to the sexual fantasies and frustrations of  middle-class America, is a fan of AriZona’s Arnold Palmer line and approached the company about a collaboration project sometime over the past year. The result is Lemon Fizz, a slightly carbonated beverage that contains natural lemon flavor and is sweetened with high-fructose corn syrup, honey, and sucralose, according to an AriZona representative. The can is decorated with images of Prince’s artwork, as well as a number of photos of the artist himself.

Lemon Fizz will debut at Art Basel Miami Beach, an influential and highly regarded show for modern and contemporary works of art, from December 6-9. The drink will be launched nationally following the art show and will be priced around $0.99 – $1.25, in line with other AriZona products.