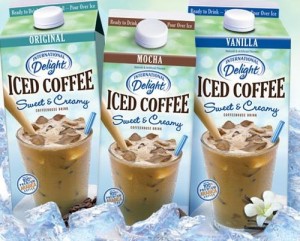 BROOMFIELD, Colo. March 21, 2012/PRNewswire/ — Temperatures are heating up, but high coffeehouse prices are leaving iced coffee lovers in the cold. Too often, iced coffee drinkers are let down by the frustrations of the coffeehouse by standing in long lines and paying high prices and attempt to make their own iced coffee at home. The results commonly end in disappointment, with many people citing that they don’t know how to make iced coffee with the same quality you get from the coffeehouse.(1) International Delight™, the brand known for turning consumers into at-home baristas with its line of premium flavored creamers, is now helping iced coffee drinkers skip the long lines at the coffeehouse and enjoy coffeehouse-quality iced coffee at home or on-the-go. The new Iced Coffee line is the first of its kind to combine coffee, real milk and cream in a ready-to-serve half-gallon container.

Along with the Temperature, Iced Coffee Consumption is on the Rise, but Consumers Desire a More Convenient and Economical Solution

The iced coffee trend has been percolating for several years, with the National Purchase Dairy (NPD) Group reporting that Americans ordered 100 million more iced coffee drinks in 2011 than they did in 2010.(2) Additionally, research found that more people currently purchase their iced coffee on the-go (78 percent) compared to hot coffee (52 percent), perhaps due to the challenges of replicating the desired taste.(3)

“Coffeehouses have made iced coffee a popular drink that most people haven’t been able to master at home,” said Niranjan Krishnaiah, Associate Director of Retail Marketing Innovation, International Delight. “The new International Delight Iced Coffee line is filling a real consumer need by removing the guesswork and the frustration.”

The rise of money-conscious consumers looking for convenient products has opened the doors for the at-home coffee experience. Utilizing the growing window of opportunity, International Delight is supporting the new line with an integrated campaign.

The national campaign will kick off with TV and digital advertisements that chronicle coffeehouse mishaps like spills, long lines and receiving the wrong order, and will showcase why iced coffee is better at home. The commercials will appear early morning on major networks as well as on cable networks to drive awareness of the new product.

A digital component of the campaign drives engagement with International Delight through a variety of online vehicles including Facebook and Twitter, videos and other online advertisements.

International Delight® was launched in 1987 and was the first flavored, liquid, non-dairy creamer on the market. The brand takes its flavor inspiration from international locales, with a number of flavors inspired by the decadent desserts served in countries like Argentina, Belgium and France. International Delight introduced a new bottle which has reduced the product’s carbon footprint by 30 percent. International Delight Iced Coffee and creamers are available at grocery, convenience stores, mass merchandisers and food service outlets across the country. For more information, visit www.InternationalDelight.com.

(1) National telephone survey of 1002 American iced coffee drinkers. This survey, written and analyzed by Ketchum Global Research and Analytics, was fielded by Braun Research between the dates of January 5 – 9, 2012. The margin of error for national findings is +/- 3.1 percentage points.