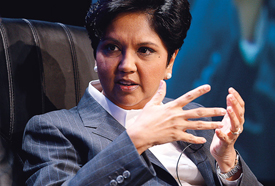 Aiming to pump new life into its beverage division, PepsiCo is developing a range of snack-based drinks, according to The Financial Times. Speaking at Beverage Digest’s Future Smarts conference in New York yesterday, PepsiCo chairman and CEO Indra Nooyi said that the company has a “whole range of products… in the pipeline that are value-added products that can be snacks made into beverages.”

While Nooyi did not name any specific PepsiCo-owned snack brands or products – which include Quaker Oats, Frito-Lay potato chips, and Cap’n Crunch cereal – to be utilized in the new beverages, she pointed to an oatmeal drink sold in Brazil and PepsiCo’s Naked brand of juices and smoothies as examples of liquid snacks with mainstream consumer appeal.

“A way to grow the beverage business is to take foods and drinkify them,” Nooyi said at the conference.

The development of new snack drink products are perhaps the clearest indication that Nooyi and other top PepsiCo executives remain opposed to a separation of the company’s snack and beverage units. A number of Wall Street analysts and investors have continuously called for PepsiCo to split into two companies, much in the way that Kraft Foods did last year, citing faster growth by its snack division and the sluggish pace of the company’s beverage business. However, Nooyi and other have stated that the units are closely tied and that a split would increase overall operating costs.

Nooyi stated that she was pleased with the progress and performance of the company after launching a restructuring plan in February that aimed for improvements in brand strength, innovation, execution, productivity, and return of cash to shareholders. She also noted that she had a positive outlook on the development of more effective low- and zero-calorie sweeteners as way to turn around declining sales of PepsiCo’s CSD products.