The Grand Poobah was not happy. They had tinkered with his Moxie. You don’t tinker with the Poobah’s Moxie.

Travis York knew he would have to meet with the Poobah. 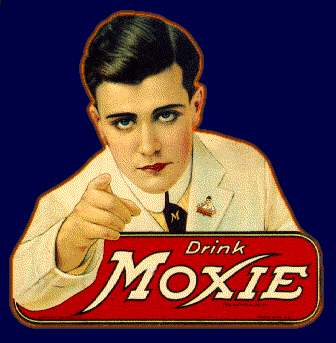 It’s the kind of meeting one might ordinarily avoid, a meeting with the Poobah. If not for one fact: GY&K had been hired to revive the once-defunct Moxie brand, and the Poobah, in Moxie circles, is a player, the President of the (yes, it’s real) New England Moxie Congress. He had to make peace.

Rather than challenge the Poobah, York worked with him. And so, a few years ago, along with other members of the Congress, York, the president of branding firm GY&K, and the Poobah — real name Merrill A. Lewis — met at the GY&K office in Manchester, N.H., to shake hands and settle nerves. York wanted the Poobah and his fellow Moxie lovers to forget about the tepidly-received line extensions and packaging changes created by Coca-Cola of Northern New England (CCNNE), which had acquired Moxie in 2007.

The Poobah was impressed with York. Together, they’ve rebuilt Moxie’s brand.

“I like the way they did business,” the Poobah said. “They were creative. They had a feel for the fact that it was a 125-year-old brand. They didn’t want to throw away the entire identity of it, but they also knew that they had to spruce it up a little bit for today’s audience.”

This meeting — a convergence of the old and the new — encapsulates GY&K’s marketing strategy since it was hired by CCNNE in 2010 to revitalize Moxie. York, who has led the Moxie rebranding plan, adjusted the marketing strategy, polished the website and continues to head an active social media effort.

It’s all anchored by the slogan, “Distinctively Different,” which was taken from an old Moxie ad and concisely explains the brand’s individualism that GY&K aims to project. York said that Moxie certainly has an acquired taste and that many people don’t like it, but he’s used this as a marketing ploy.

The newly furbished Moxie website serves as one of the better examples of GY&K’s brand repositioning, and as a hub for these unique consumers. While the bottom of the page connects site visitors to Moxie’s Facebook and Twitter pages, and additional links of relevance, the revolving images in the background are shown in black and white. The company brought in the Poobah himself to help establish the breakdown of Moxie’s history, which rests on the front page just above a link to the Moxie store and a page titled “Moxology” that provides drink and food recipes that contain Moxie.

York said that he’s looking to further explore this page, which he thinks could help continue to forward Moxie’s appeal to the brand’s three consumer bases: long-time fans, like the members of the New England Moxie Congress, people that have tried Moxie but don’t like it (yet), and new consumers who have never heard of Moxie. York said that the website, with its blend of history and new technology, serves as a way to welcome all three types.

“We had to create a website that wasn’t like too slick or too cutting edge,” York said.

Yet despite the brand’s rich history, GY&K uses social media to reinforce its “Moxology” personality that appeals to a diverse consumer base: 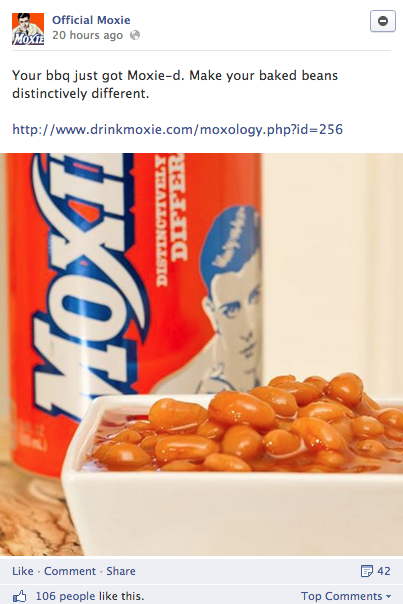 “We’ve gained a lot of momentum because the brand had been so quiet for a while,” York said.

Before the Coke acquisition in 2007, Moxie had lost its way in the marketplace. The years of dominance from sweeter CSDs like Coca-Cola and Pepsi had displaced it from many shelves. York said that since GY&K took over the product’s branding, Moxie’s sales have grown by 35 percent.

Of course, this growth has also been bolstered by CCNNE’s ability to land new distribution channels for the brand. Justin Conroy, the general manager of Moxie at CCNNE, said that he recently struck a deal with Polar Beverages, the largest independent distribution house in the Northeast, which will distribute Moxie in the metro Boston area.

Conroy said that while Polar will certainly help, he’s taking a steady approach with the Northeastern-focused brand, which he thinks has future potential in states like Arizona, Texas and Florida. He’s waiting for the right partners and timing, and said that he could envision geographical expansion over the next three to five years.

“You only have one chance really to succeed in the marketplace,” Conroy said. “We don’t want to launch anywhere else until we’re comfortable with the growth strategy.”

He compared his strategy to Cheerwine, a cherry-flavored CSD maker that also bottles and owns its product. He said that Cheerwine could potentially go nationwide, but it’s currently comfortable with distribution primarily in its traditional stronghold in the Southeast. He also said that like Cheerwine, Moxie is a flavored CSD that could outpace the declining soda giants. According to Beverage Digest, U.S. consumption of CSDs has declined by 12.5 percent from 2002 to 2012. Yet Conroy thinks that flavored CSDs, with their independent style and appealing taste, could succeed despite the category’s wane.

“It remains unique,” Conroy said. “It kind of bucks the trend.”

Meanwhile, he’ll continue to not just bottle and distribute Moxie, but, like the devoted Poobah and the New England Moxie Congress, also serve as a brand ambassador under GY&K’s renewed direction.