Led by the power trio of Vita Coco, ZICO and O.N.E., coconut water continues to move in both the natural and mainstream channels. The category has drawn from the expansive, often migratory pools of Vitaminwater and sports drink consumers, but a significant portion of this demographic seems to prefer current trends and health-related developments over lifelong brand loyalty.

When it comes to success, these coconut water brands aren’t deviating much from what’s been working. They’ve never positioned themselves as the next anything, rather they formed the basis for a new category. They touted the health and functional benefits of their own products, with electrolytes serving as the main pull, but the focus was not as strongly on performance as sports drinks. The triumphant push of that power trio has influenced mainstream consumers to think about water in different terms and paved the way for the next tier of coconut water brands, such as Harmless Harvest and Zola.

At Natural Products Expo West 2014 in Anaheim, Calif., yet another tier seemed to be taking shape. But it wasn’t coconut water; it was an amalgam of offbeat water brands. We had maple water, birch tree water and barley water. We had cactus water, olive water and even artichoke water.

Now, let’s get this out of the way early: none of the brands from this latest tier claim to be following the momentum of coconut water. They don’t view their products and coconut water as an either/or proposition. However, despite the intended distancing from coconut water, many of these brands nonetheless recognize coconut water as a groundbreaking category that has ushered their innovation into the beverage industry. So whether or not these beverages last on their merits, the individualistic entrepreneurs behind the ideas haven’t forgotten the role of coconut water, which has unfurled a market (scale to be determined) for offbeat waters.

“Without brands like Zico, Vita Coco, O.N.E. and now Harmless Harvest paving the way, I don’t think that a product like ours, which is pretty outside-the-box and innovative, could really exist,” said Matt McKee, founder of Caliwater, a recently-launched cactus water. 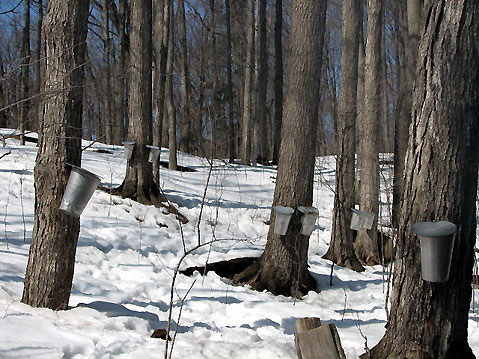 We’ll soon get to cactus water. But first up is maple water, which could be the most scalable category of the offbeat water tier. Maple water isn’t just water and maple syrup, but is instead the water that flows through a maple tree around this time of year. More commonly turned into syrup, companies like Vertical Water, KiKi Maple Sweet Water, Happy Tree Maple Water and SEVA are marketing the water as a source of electrolytes, manganese, iron, calcium, zinc, vitamins A and B, antioxidants and prebiotics, depending on your brand.

Michael Farrell, the director of the Uihlein Forest, Cornell University’s sugar maple research and extension field station in Lake Placid, N.Y., has been working as an independent consultant with Vertical Water and a number of other maple water companies. Farrell has also been drinking maple water for about a dozen years. He said that while sap includes vitamins, minerals, amino acids and enzymes that fit well in our scientific lexicon, the research of maple water isn’t extensive enough to comprehend the entirety of its functional benefits.

While it’s nearly impossible to predict when a tree is ready to be tapped, Farrell said that the typical range is January (especially in the South) to the end of April, with March typically serving as prime time. It’s been a cold March in the Northeast this year, so he hasn’t had much luck yet. However, when he does, he feels pure replenishment. Farrell admits that much of the effects of maple water are psychological. You tap the trees at the beginning of spring and it’s nice to be outside again, in the forest, drinking tree blood. You might even feel like some kind of vampire Daniel Boone, if only for a minute.

“It’s the time of the year when I feel the best,” Farrell said.

However, the need for more research — scientific and consumer — extends beyond the interests of guys who hang out in forests for a living. Like any beverage these days, it’s having functionality backed by science that is a key selling point for a massive portion of the industry. Maple water companies need research to add credibility to their claims. The pure refreshment that Farrell was talking about isn’t enough.

Vertical Water, another player in the maple water category, has already worked with investors to support the atypical requirements of this kind of product. Paolo Cugnasca, managing director of Vertical Water, said that he has about a four week window of time when the product can be made commercially. The sap is produced three days after the tapping and immediately treated, bottled and sent to a warehouse. Vertical Water has a 14-15 month shelf life. Dealing with the inconsistencies of this process and juggling through it with retailers and distributors, Cugnasca said, remain the company’s greatest challenges.

That’s a pretty big shift for Keith Harris, the CEO of Kiki Maple Water, another of the maple water brands on display at Expo West.

For 11 years, Harris served as a senior production manager at Musashi Auto Parts in Toyohashi, Japan. Lots of machinery. Much was mechanical. Harris was in control and the pace was rapid.

“My heart was about the size of a coffee bean,” Harris said. “And it was the same color. I had no heart. It was just business, my friend.”

In June 2009, after researching maple sap for about two years, Harris resigned from his job in Japan and left one industrial grind for another: the beverage industry. After four years of distribution in Ontario, the brand launched in the U.S. at Expo West. Harris envisions maple water as a complementary piece to coconut water and sees a limited amount of competition in what he terms “an agricultural revolution in the maple industry.”

“Maple sap itself, it could go as big as coconut water quite easily,” Harris said. “The potential is there and maybe even bigger.”