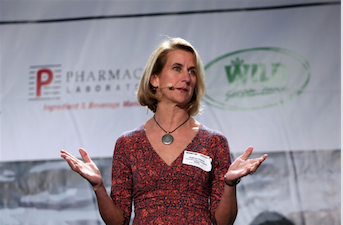 Coconut water companies are responding to a recent report that the category has gone flat. In short, they aren’t buying it.

The debate began last week at BevNET Live in Santa Monica, when shopper insight experts Brian Reed of Information Resources Inc. and Kathryn Peters of SPINS delivered a data-driven presentation on channel shifting and consumer changes within the beverage industry.

Their revelation: Dollar sales of coconut beverages grew less than 1 percent in the 52 weeks preceding September 28, 2014.

The declaration hit coconut water’s leading brands with the force of a palm tree in a hurricane, and they started a data offensive of their own.

Tom Larsen, President and General Manager at ZICO, refuted Reed and Peters’ assessment in a call to BevNET. “First and foremost, the category’s though the roof,” he said. “It’s the fastest growing category of anything that could be considered a meaningful category.” Citing Nielsen data, Larsen said the category had grown 31 percent growth in the 12-month period ending in October 2014.

Vita Coco too, quickly fired back on the SPINS and IRI presentation, making noise in a story on Food Navigator-USA and also sending a note to BevNET from company representative Arthur Gallego.

“According to data that we get from SPINS [powered by IRI] the biggest snapshot of which is MULO + C[defined as total US multi-outlet and convenience channels, combined] coconut water sales are up 25 percent over the past 52 weeks in dollar sales, and Vita Coco is up 35 percent over the same period. This includes all channels except natural, specialty gourmet, club and independent stores. Club and independent stores have been incremental to Vita Coco’s brand and total category growth in the US.”

Mary Ellen Lynch, Director of Consumer Insights and Strategic Partnerships at SPINS defended the data in an email to BevNET, saying “the mainstreaming of the segment is putting downward pressure on price which also contributes to flatter growth.” The assessment suggests that a significant portion of buyers from the natural channel have moved their coconut beverage purchasing to mainstream channels, where the product can be found at a cheaper price.  SPINS/IRI reported a 19.9 percent growth of coconut beverage dollar sales in the conventional grocery channel and a 30.6 percent decline in sales in the natural channel.

As far as bridging the gap between the seemingly disparate points of view on the category’s growth, there are a few variables that could account for the discrepancies between the data reported by coconut water companies and the presentation data.

“Of all 16 categories analyzed, coconut beverages showed the biggest and most overt shift to   mainstream,” Lynch noted.  Those coconut beverage buyers are the heaviest product consumers, but they are now able to buy more coconut water for less money in a supermarket or a Wal-Mart.

“Some have even loaded up the pantry and look like they are ‘lost’ buyers – also putting downward pressure on dollar growth when looking period over period,” she added.  “That being said, the information we have indicates mainstream channels have indeed engaged  some new shoppers.    The new mainstream buyers tend to be lighter buyers and also discovering the items at the mainstream price point.   It is indeed a time of rapid evolution for the segment!”

Regardless, both sides seem to concur on the need for product innovation as a crucial component in coconut beverage companies’ fight to maintain growth. Lynch called raw HPP coconut water makers Harmless Harvest — a fast-turning brand in Whole Foods and a few other, broader accounts — “great for the category, and we definitely expect them to scale.” Zico’s Larsen acknowledged innovation’s role in growth, but also pointed to household penetration (the percentage of households in a market carrying a particular product or brand). And both Zico and Vita Coco are rolling out larger sizes suited for the dairy case, products that reach more toward the mainstream (juice blends, lemonades) and promotions that are more in line with larger companies extending the reach of their brands.

Meanwhile, although Harmless Harvest has grown largely as a natural and specialty channel brand, the emphasis on natural accounts by companies like Zico and Vita Coco has waned, particularly as the brands have entered the larger distribution systems preferred by Coke-owned Zico and DPSG-aligned Vita Coco — systems that are better suited to serving retail accounts like large drug chains, Wal-Mart, Target, and Kroger.

So who is ultimately right? It depends on the data set, it appears, along with the way consumers adopt the products in the mainstream in the future. Meanwhile, vive la difference!