As CEO of the fastest growing beverage company of the past few years, Kevin Klock naturally refrains from complacency. That’s not how you rally the growing body of troops when $350 to $400 million in sales, the hottest brand in the industry and the envy of countless adversaries isn’t enough. Klock will have nothing to do with quiescence when he’s got plans to reach $1 billion in sales by 2018.

Considering this, Klock didn’t mind firing a few shots at the competition during a conference call for investors conducted Thursday by Bonnie Herzog, the managing director of beverage, tobacco and consumer research for Wells Fargo Securities, LLC.

His biggest target? Enhanced water. Klock has fairly frequently compared his company’s growth to that of vitaminwater, but his assessment for the category was a stark one.

“I think we’ve all seen that the enhanced water category is taking a beating,” Klock said. “Probably that trend is going to continue.”

Up next, ladies and gents, how about Coke’s latest attempt to dethrone Sparkling ICE? We’re talking about another Glaceau product, the relaunched, sparkling version of fruitwater, of course, which the cola giant released this past May.

“fruitwater really is having no impact to us whatsoever,” Klock said. “It seems to be causing the downfall of one of their brands more than anything.”

Jerry Reda, the chief operating officer of Big Geyser, a renowned non-alcoholic beverage distributor in New York that has carried Sparkling ICE since March 2013, said that Coke’s attempt to innovate with fruitwater morphed into a confusing duplication that should have never hit the market. That’s especially true considering that while Whole Foods carries other vitaminwater products, it won’t carry this one — fruitwater contains artificial flavors and colors, a no-no for the natural grocer. Inconsistencies like this make Reda think that fruitwater muddles the Glaceau brand.

By going out of a comfort zone to copy Sparkling ICE, any competitor hurts its brand, he said.

“That would be like Kashi cereal coming out with Fruit Loops,” Reda said.

Klock indicated that his brand is drawing consumers from across the beverage spectrum, pulling its audience from buyers of CSDs, water, tea and others.

“We now look at the whole liquid refreshment market,” Klock said. “Anything you would consider refreshing is more likely who we’re stealing from.” 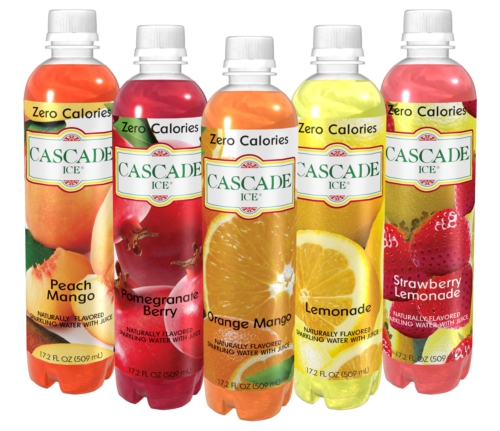 There's been no shortage of competition, but that doesn't dissuade Kevin Klock, the CEO of Talking Rain.

The confidence and lack of fear from competition — including a growing cohort of imitators — isn’t an issue. In Reda’s opinion, the competition is only creating more awareness and validation for a category they’ll never own. With each release, they’re decapitating the Hydra.

Meanwhile, Klock is focused on feeding Sparkling ICE’s momentum with distribution advancements, voids in the marketplace, continued innovation and more feet on the street, he said.

Klock said that Talking Rain, the parent company of Sparkling ICE, used to rely on little pockets of DSD distribution throughout the country. That’s a common approach for an unproven brand. However, last year — a year that helped establish Sparkling ICE’s current foothold at the pinnacle of liquid refreshment (the company boosted its average shelf space with retailers by a minimum of 50 percent) — Talking Rain had about 20 percent of the country covered with DSD distribution. During Thursday’s call, Klock said that he’s now got just about every county in the U.S. covered with DSD.

As previously reported from the NACS show in Atlanta this past October, Sparkling ICE has plans to penetrate the convenience-store channel, where the major players in the enhanced water category accumulate about 55 percent of their business and CSD companies snag about 60 percent. If Sparkling ICE, which draws about $300 million from multi-outlet stores like supermarkets, drug, and large format retailers, can eventually draw about 50 percent of its business from the C-store channel, he said that $1 billion could become far more reasonable of a goal, even without much growth.

Reda said that, along with C-stores, Sparkling ICE has room to grow in drug stores, up-and-down-the-street accounts and the corporate and institutional sector, which includes foodservice companies such as Aramark, Sodexo and Compass. He added that Sparkling ICE is only penetrating about 4-5 percent of the New York market — a number that could eventually reach the 90s.

“As far as the New York market is concerned,” Reda said, “we haven’t even gotten through the appetizer yet.”

Klock recognizes that continuing to hawk the same few flavors of Sparkling ICE won’t enable the brand to sustain its astronomical growth. Thus, he credits product innovation as a key step toward maintaining the company’s ascent. This past February, the company launched Crisp Apple and Peach Nectarine flavors. In May, Talking Rain introduced its lemonade extensions, which featured Raspberry Lemonade, Strawberry Lemonade and Lemonade with Tea. On Jan 8., the company introduced two more flavors: Cherry Limeade and Strawberry Watermelon. None of these flavors are particularly earth-shattering. However, by adapting them into the Sparkling ICE format, consumers get something new from a familiar source.

Reda likes the new flavors and he said that Sparkling ICE won’t get stale when, for many consumers, the product is still fresh.

“There are still so many people who haven’t tasted the brand,” he said.

To compensate for the big plans, Klock said that the company will continue to bolster its staff. In 2010, preceding the massive rise, Talking Rain staffed about 65 people and most of them were related to the manufacturing facility. At this time, the company has 240 employees and 30 to 40 more hires on the books. He added that the sales force, currently at 65 people, will sit at more than 80 people by the end of 2014. Getting feet on the street is one of Klock’s primary objectives, so the number of employees will continue to rise.

Could all of these plans lead to Talking Rain going public and selling out? Klock will continue to monitor the market and evaluate what’s best for the company (as CEOs so often say). However, until that point, he said, he wants Talking Rain to emulate another privately-held company.

He wants to be the next AriZona.

Reda said that Klock has continued to understate and over-perform projections. Could $1 billion by 2018 be another understatement? Reda wouldn’t be surprised.

“The brand is on fire,” Reda said, “and we believe that we’re only scraping the surface.”