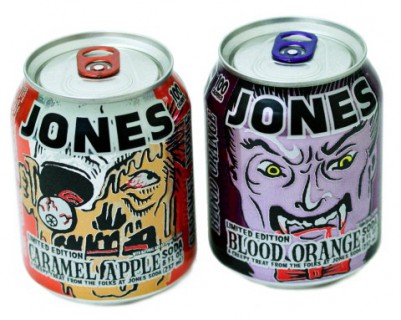 Following the success of last year’s introduction of newly designed Halloween cans, this year’s edition features two fun flavors that best represent this holiday. Both the Vampire Blood Orange and the Zombie Caramel Apple have been very popular with consumers, with enhanced graphics featured in this year’s edition that better showcase the bold and creative artwork that Jones Soda is known for. Matching colored tabs top off the look and make for a truly unique and visually eye-catching product. At just 100 calories per eight ounce can and made with 100% pure cane sugar, these limited edition treats are perfect to hand out to trick-or-treaters as they roam their neighborhoods on Halloween.

”We wanted to continue this fun Halloween tradition with Target and other retailers,” stated Jennifer Cue, Jones Soda CEO. “The new and improved packaging excites kids and conveys the spirit of Halloween in a way that only Jones Soda can. And these flavors are a treat that both kids and their parents will enjoy.”

The Halloween-themed sodas are available now and sold in 4-packs at all of Target’s 1,795 U.S. stores. They can also be found throughout the U.S. at Cost Plus World Market, Associated Food Stores, Harmon’s, and HyVee as well as online atwww.jonessoda.com.

Headquartered in Seattle, Washington, Jones Soda Co.® (OTCQB: JSDA) markets and distributes premium beverages under Jones® Soda, Jones Zilch® and Jones Stripped™ brands and sells through its distribution network in markets primarily across North America. A leader in the premium soda category, Jones is known for its variety of flavors and innovative labeling technique that incorporates always-changing photos sent in from its consumers. Jones Soda is sold through traditional beverage retailers.