With its Israeli roots and a plant in the West Bank, SodaStream is more directly affected by the region’s ongoing conflicts than most beverage companies. But that hasn’t shaken Daniel Birnbaum, the CEO of the at-home soda kit maker. Birnbaum will decide within the next two months if he’ll close the plant, but if he does so, it won’t be because of Palestinian civil rights groups.

“The considerations will be purely financial, and do not include the European boycott on manufacturing in the territories,” Birnbaum told Haaretz. “Nor [will they include] the various calls to boycott products of the company because of its location in Ma’aleh Adumim. The boycott is a nuisance, but does not cause serious financial damage. We are not giving in to the boycott. We are Zionist.” 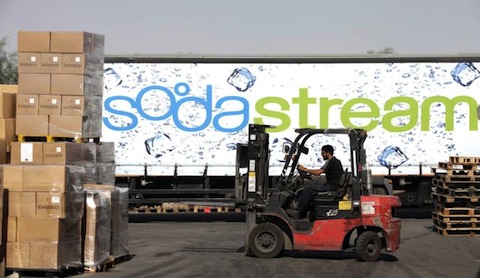 The plant in question has triggered a wide-reaching boycott, divestment and sanctions (BDS) campaign against Sodastream, with brand endorser Scarlett Johansson serving as an easy scapegoat/hero.

More pressing to Birnbaum, it seems, is his company’s value, which has declined by more than 35 percent over the past year, according to The Street, as cited in the article. The West Bank plant’s future could hinge on the role of a new SodaStream plant in Lehavim, a small Negev town just north of Be’er Sheva. That plant has expanded its activity and inherited production lines from the West Bank plant.

SodaStream has fired 100-200 workers from the West Bank plant, leaving approximately 1,100 employees there, with about 850 who are Israeli Arabs or Palestinians, the article notes.

A judge from Alameda County Superior Court in Oakland, Calif., has changed the wording of a Nov. 4 Berkeley ballot initiative that would tax the distribution of sweetened beverages.

Judge Evelio Grillo found the term “high-calorie, sugary drinks” to be “partial and misleading,” and has replaced it with “sugar-sweetened beverages.”

And for all you readers out there who still, you know, vote and all that, here’s what this kind of initiative will look like on Alameda County’s ballot:

At this time, BevNET would like to break for water and orange slices and remind the anonymous scribe of this ballot question that our company is hiring.

Anyway, Grillo also kept his red pen busy by replacing “high-calorie, low-nutrition products” with “sugar-sweetened beverages” and omitted the modifier “heavily” from a reference to presweetened tea. The ballot requires a majority vote to pass.

With LeBron James in Cleveland, the natural heir to the king’s throne is…Birdman?

Chris “Birdman” Anderson, the forward for the Miami Heat, that guy you might have seen on ESPN who you hope never meets your daughter, has signed an endorsement deal with Hard Rock Energy Drink, according to The Miami New Times. The drink is produced, marketed and distributed by Enterprise Beverage Group, a subsidiary of the Seminole Tribe of Florida. 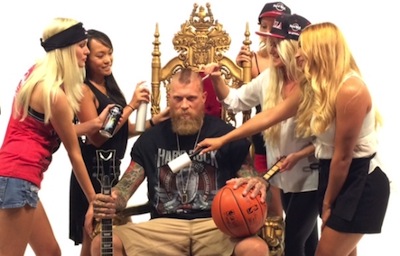 Another lint-free day in the life of Birdman.

In a recent photoshoot, Birdman is seen sitting in a King James-like throne, surrounded by the Hard Rock Energy Girls. One of them has a lint roller. And while Birdman might not actually be a rock & roll musician, he’s got long sleeves of tats, a mohawk, a scowl, and timeless, Dylanesque statements to back up his street cred:

“In my previous life, I think I actually was a rock ‘n’ roller. But now I’m an athlete. This is the way the cards were dealt to me.”

“Every day life to me is music. I love listening to music.”

Explosion at Bottling Plant in Florida

A gas explosion threw a 60,000 pound boiler tank through a wall of a beverage packaging facility in Lakeland, Fla., on Tuesday morning, according to The Tampa Tribune. No injuries occurred at Whitlock Packaging Corp. because nobody was working in the area of the explosion, according to Bart Lewis, the company’s human resources manager.

The incident started in the boiler room, where three 4,000 gallon tanks are heated with gas to produce steam for power. After going through the wall, the tank landed on adjacent train tracks, shutting down rail traffic before a crane was used to remove the tank, the city of Lakeland told The Tribune.

Whitlock acquired the 300,000 square-foot facility, which bottles non-carbonated beverages for a number of national brands, as part of its 2004 acquisition of Juice Bowl Products.