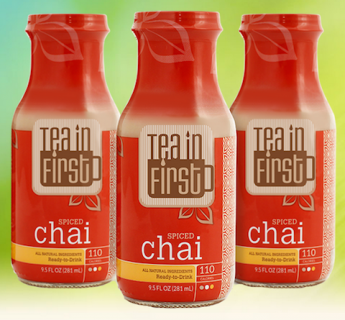 LONG ISLAND CITY, N.Y. — What goes in first, tea or milk? So goes the saying from the long-standing debate amongst avid tea drinkers. To end this debate, the tea company, Tea In First®, was formed and has launched a line of ready-to-drink (RTD) tea lattes.

Tea In First® recently released its debut tea – an all-natural, RTD, spiced chai. As the brand name suggests, the most important ingredient – tea – goes in first and is delicately combined with farm fresh milk and natural spices (cardamom, cinnamon, cloves, ginger, and black pepper) to ensure an exquisitely balanced chai with lots of aroma, flavor, and creaminess.

“We are the only company in the country focusing on all-natural, shelf stable, low calorie, RTD tea lattes made with fresh milk,” says founder Nishita Mody. “We wanted to create a modern take on the very traditional Masala Chai, while keeping in mind the health consciousness of our consumers.”

With the fast paced New York City lifestyle, it was important for Tea In First®’s line of products to be shelf stable and easily available on the go. “Traditionally, you’d have to spend time obtaining all the spices and combining them with tea and milk in a saucepan,” says Mody. “Now you can just go to your local store and enjoy it chilled or you can heat it up and have a hot cup of chai anywhere…in minutes!” As for the health benefits, Mody went on to say, “In my culture, our blend is known to boost immunity, promote relaxation, and provide many antioxidants.”

Tea In First®’s Spiced Chai has officially launched in the Greater New York City and Boston areas and can be found throughout in select natural food stores, patisseries, and convenient stores. The company also has their product available for purchase online.

“This has been a true labor of love for myself and my business partner, Pinank Modi”, continued Mody. “We are thrilled to be offering a unique and healthy tea product to consumers. The initial response has been overwhelming and we’re looking forward to expanding our market coverage and product line. Tea In First® is currently in the development stages of additional flavors with a traditional Matcha Latte to be the next flavor available to consumers.

About Tea In First®

In 2012, Nishita Mody was posed with a culinary challenge to prepare food that was healthy and tasty because of the tasteless and restricted diet her husband was put on after a surgery. Mody started adding a hot cup of spiced tea to every meal and, along with making meals more enjoyable, the tea also aided in digestion, boosted energy, and provided many antioxidants. To share their spiced tea with others, the couple decided to create a ready-to-drink version that can be chilled or heated. Additional information can be found at www.teainfirst.com.