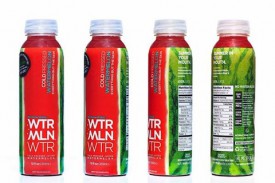 New York-based cold-pressed juice company WTRMLN WTR is bringing a beverage industry veteran into the fold with the addition of Rob Paladino. Paladino, who will join the company as its CEO, has over 30 years of experience as a consumer product and service industry executive, including 15 years at PepsiCo as well as a stint at Coors Brewing Company. More recently, he’s served as co-founder and CEO of CoolJuice Beverage company.

Paladino told BevNET that WTRMLN WTR will attempt to draft on the success of coconut water and bring the brand’s nutrient-rich, cold-pressed watermelon juice to the masses.

“Once the brand was created under my creative direction I knew I wanted to bring someone in with the industry expertise,” WTRMLN WTR co-founder Jody Levy said in a call with BevNET. “Rob had this awesome big beverage experience with Pepsi and Coors, but he also had done so much in the startup space. There was a great blend of the two. He understands the magic of the company as much as he understands the nuts and bolts and logistics of the beverage world.”

Levy, whose background is in experiential design, now plans to re-focus on the brand’s creative endeavors with Paladino taking over the reins of operations.

Paladino said that there are opportunities to streamline the process of getting a watermelon from the field all the way to the shelves of retailers.

“It’s a high priority to make this product super efficiently and consistently for the lowest possible cost,” he said. “And then use the improved margins to promote it and sample it and feature it at events.”

“We want to educate the consumers about its hydration benefits and just get the product in their hands because once they taste it they fall in love.”

Earlier this year, WTRMLN WTR added a lemon-infused extension to its product line and in August, the company broke out beyond the Tri-State area by securing Whole Foods placements in 30 West Coast locations. In addition to boasting the drink’s health benefits, which include being rich in potassium, Vitamin A, Vitamin C, magnesium and lycopene, WTRMLN WTR also claims the title of being “Nature’s Viagra.” Watermelon is rich in the amino-acid Citrulline, which like Viagra, relaxes and dilates blood vessels.