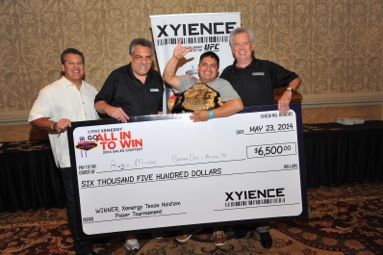 LAS VEGAS — XYIENCE Xenergy, the official energy drink of the UFC®,hosted more than 120 people from 22 distributors at Green Valley Ranch & Spa in Las Vegas on May 23 – 25.  Attendees, who were winners of XYIENCE’s ‘All in to Win’ sales incentive contest, upped the ante on Friday night at the inaugural $10,000 XYIENCE Xenergy Texas Hold ‘em Poker Tournament. Augustin “Augie” Munoz of Brown Distributing in Austin, Texas won the tournament, which was hosted by former NFL football and Olympic athlete Willie Gault.

“Our success is due to the hardworking and talented teams at our distributor partners,” said Reuben Rios, XYIENCE’s vice president of U.S. sales.  “We presented a challenge and the sales teams delivered, so this weekend was about honoring and thanking those folks who are responsible for XYIENCE’s success.”

About XYIENCE (pronounced zy-ince)
Headquartered in Las Vegas, XYIENCE’s sports nutrition products, which include Advanced Protein Complex, Pre-Workout Booster and Thermogenic Fat Burner, among others are designed to support an active and healthy lifestyle. The brand’s flagship product is Xenergy (pronounced zen-er-gy) –the official energy drink of the Ultimate Fighting Championship® (UFC®). Launched in 2006, Xenergy is the first energy drink created by a nutrition company and the fastest growing brand in its category. Xenergy is a sugar-free, zero-calorie beverage that is made with all-natural flavors and colors. Xenergy energy beverages are available in Frostberry Blast, Cran Razz, Fruit Punch, Mango Guava, Blu Pomegranate, Cherry Lime, Tangerine and Melon Mayhem. The Xenergy energy family also includes: Xenergy + Lemonade Pineapple and Raspberry and Xenergy + Tea Honey Ginseng and Raspberry Acai. Xenergy + Hydration Grape and Tropical Punch are non-caffeinated beverages fortified with electrolytes and a blend of B vitamins.

Find these and other sports nutrition products from XYIENCE online at www.xyience.com, or at a retailer near you. Or connect with XYIENCE on Facebook, Twitter and YouTube.