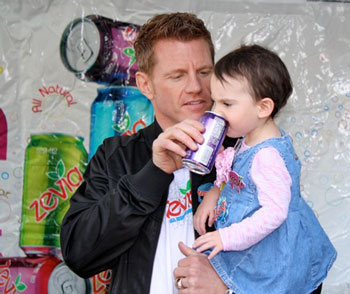 Zevia CEO Paddy Spence, left, considers the everyman, the everymom and the everykids, as seen here.

Even with his efforts to push the category forward and his Ivy League credentials, Paddy Spence approaches the CSD industry with the everyman in mind.

Zevia, the CSD company of which Spence is the CEO, does indeed contain no calories, sugar and artificial sweeteners, but it’s also flavored in well-known styles: Cola, Cherry Cola, Grape, Orange, Ginger Ale, Cream Soda. There’s more (15 to be precise), but Grapefruit Citrus is about as esoteric as it gets.

By communicating the brand’s health-focused proposition in easily comprehensible terms while targeting the everyman, the everymom and the everykids, Spence has posted hearty results. Last year, Zevia racked up $60 million in retail sales from 16,000 stores. And by boosting the company’s presence in single-serve channels such as gas stations and convenience stores, those figures could easily rise.

Bonnie Herzog, the managing director of beverage, tobacco and consumer research for Wells Fargo Securities, held a conference call with Spence on Wednesday and covered an expansive amount of subjects on the company’s history and future. Spence began by discussing his work as the head of sales and marketing for Kashi and casually mentioned his founding of SPINS, a supplier of data from the natural and specialty channels. He then broke down the strategies that have provided Zevia with an established foothold in the mainstream channel to complement its foundation in the natural channel.

Roots of Distribution and Infrastructure

Based on early purchasing data, Spence said that the company decided at an early juncture that it would begin as a warehouse brand. In 2010, 31 percent of the company’s transactions came from multiple 6-packs. Consumers were buying eight cans on average. That number has since grown to 37 percent. These figures tell Spence that a significant portion of the company’s consumers are going to the store knowing they want Zevia.

“That’s a planned purchase,” he said.

The warehouse-centric approach has had a number of ripple effects for the business from channel and infrastructural perspectives. From a channel standpoint, Zevia has focused on natural retail chains such as Whole Foods and Sprouts, and more recently conventional food and supermarket chains as well as drug and mass stores. The strategy has also enabled the company to keep a lean and efficient sales force (the company has 22 employees), Spence said. For example, one person covers Whole Foods nationally. Another person covers Kroger nationally. This contrasts with the need for a number of feet on the street to push for more business in local gas and convenience stores.

To follow this strategy, Zevia complemented its 6-packs with the recently-released 10-packs, which offer another choice and better value for high-volume accounts.

“Soda is a ubiquitous category,” Spence said. “It’s in every channel, even Staples and Office Depot or Toys R Us are selling a little bit of soda.”