Though liquid beets are typically associated with an older crowd, i.e. your dear grandmother’s borscht, the beetroot has recently started to gain traction within a younger and more active consumer demographic. 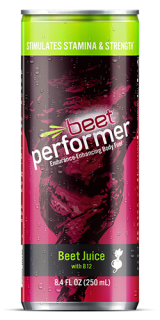 Last year, The Wall Street Journal profiled the use of beetroot juice in the locker room of the Auburn Tigers NCAA college football team, whose members began consuming the juice as a performance supplement before games in 2013 for its reported benefits ranging from increased endurance to improved blood and oxygen flow to the muscles. Even as the team appears to have a love-hate relationship with its “secret sauce” – tight end D.J. Uzomah called it “the worst thing in the world” – the Tigers’ strong record over the last two seasons suggests that beetroot juice might be worth the squeeze. And the Tigers aren’t alone. Beet-based beverages are on the rise amongst triathletes, marathon runners, cyclists, and even body builders.

According to data from global market research firm Mintel, new beverages launched listing beet as an ingredient have risen steadily since 2012, which coincides with the rise of research surrounding beets and athletic performance. While Mintel could not give an exact number, analysis from the Mintel Global New Products Database (GNPD) indicates that percentages of new product launches have nearly doubled from 2012-2014. And beets are also listed as prime ingredients in a number of hot categories, including high pressure processed juices (HPP) and other premium-priced juice products.

CAJ Food Products is the U.S. supplier of Swiss juice brand Biotta, the top-selling beetroot juice in the United States. CAJ President Matt Herzog says he took notice of the new press focusing on beets, but Biotta’s 16.9 oz. glass bottle wasn’t the most convenient product to appeal to an on-the-go athlete. So this year, CAJ introduced Beet Performer, packing 250 mL of beetroot juice in a portable 8.4 oz. can. 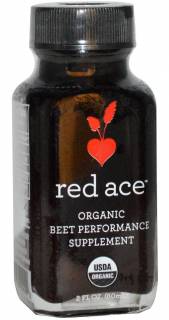 “We were really seeing two different emerging markets for beetroot juice so we decided to segment the market based on what people were looking for,” Herzog says.

Boulder, Colorado-based Red Ace Organics was the first brand to position beetroot juice as a performance supplement upon its launch in 2013, packing three USDA organic beets in a 2 oz. supplement shot. Red Ace is now available in all regions of Whole Foods Markets nationwide, and recently gained additional national distribution through UNFI.

Outside of the hardcore fitness enthusiasts, beet-based beverages have also been gaining fans within the more general health and wellness community. In January, New York City by way of England-based Love Beets, which has been selling marinated beets in the US since 2010, underwent a brand redesign for its RTD beet beverages, emerging with a USDA organic beet juice as well as a Cherry and Berry beet juice blend — an effort to bring aboard the organically-inclined and to possible lessen the flavor barriers for people like D.J. Uzomah. 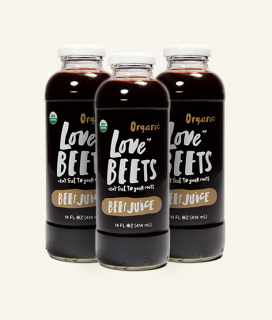 Beets are also spreading as an important ingredient for brands that are not entirely beet-based. Brands like Health Ade kombucha and high pressure processed juice makers like Suja, Temple Turmeric and Forager have introduced beet juice-infused beverages within the last two years. Dan Sullivan, founder of Temple Turmeric, argues the HPP process is the ideal method for delivering the maximum amount of benefits from the beetroot in a beverage form.

“The beta-alines from beets aren’t heat stable so they break down through the heat process,” Sullivan says. “HPP drinks will really help to maximize those beta-alines of the beetroot.”

But regardless of its delivery system, beet juice as a product  appears in prime position to capitalize on the current health-conscious trends of the food and beverage industries. Maybe Grandma was ahead of her time.