Ten years ago, if one were to ask food and beverage executives about the future of the American consumer, few could have foreseen how swift and unforgiving change has come. Americans have with their purchases — or lack thereof — propelled a dramatic shift in the landscape, less an evolution than a leap in history that took place seemingly in the blink of an eye. More and more, buyers examine labels with a critical eye. They know what ingredients they want and ones to avoid. They seek out healthy, natural and better-for-you products and increasingly bypass established brands in favor of new and innovative ones.

The shift is evident in so many of the quarterly reports and investor presentations issued by the old guard of food and beverage conglomerates, including the Campbell Soup Company. Ahead of its “Institutional Investor Day,” Campbell this week outlined a range of plans to stimulate sluggish sales, including an increase of its organic offerings, greater access to information about its ingredients and how its foods and beverages are made, and a continued expansion to grocery store perimeters, which are often a haven for fresh and refrigerated products. For Campbell, strengthening its core business is at the heart of all change, and far from abandoning its well-known brands, the company is leaning on long-established name equity as a way to continue the conversation with consumers.

That includes V8, and Campbell has over the past year leveraged widespread familiarity of the brand to launch of new product lines in a variety of categories. Along with a line of protein-packed drinks and another that emulates trendy super-premium juice blends — albeit pasteurized and in a much more affordable offering — Campbell recently released a new set of all-natural enhanced waters that bare the V8 brand. V8 Infused Water, which comes in three varieties, Cucumber Lime, Black Cherry Pomegranate, and Mandarin Orange Ginger, each made with 25 percent juice and include the equivalent nutritional value of a full serving of vegetables. The line launched in May and is currently being test marketed in Target and Walgreens stores across the U.S. The beverages retail for $1.99 per 16 oz. bottle.

Explaining the rationale for the development of V8 Infused Water, Kelli McCusker, the Vice President of Beverage at Campbell Soup Company, said that “people are looking for water that is simple and flavorful and not just straight water, but not confusing either.” McCusker, whose role is focused primarily on V8 (Campbell’s Bolthouse brand is managed by a separate department), shared her comments in a June interview with BevNET.

“You’ve got waters that are pure and refreshing on one end of the spectrum, and then you’ve got an attempt to make waters more interesting and tasty on the on the other end of the spectrum,” she said. “And the way that they’re getting to interest and taste is a variety of different methods. I would argue that some of it is not real, very artificial. Some of it, in terms of the ingredients, are not part of the common vernacular. And so we’re taking the equity that we have, which is in vegetables and vegetable blending, and bring that serving of vegetables to water to make it more interesting, fun, tasty.”

Packaged in clear plastic bottles, the waters each contain 35 calories and 6 grams of sugar, a by-product of the added juice. Referring to some of the trendy sweeteners like stevia and monk fruit, each of which are increasingly utilized to achieve low- and zero-calorie formulations for beverages, McCusker said that with V8 Infused Waters, Campbell is trying to “be really, really simple” and “use something that we have equity in as your vehicle to deliver the story, and that is vegetables.” 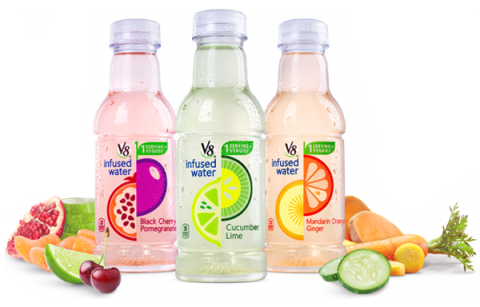 “We weren’t shooting for calories; we were shooting for efficacy of vegetables to make it interesting and flavorful,” she said. “When you do that and add the 25 percent juice, what we’re doing is we’re getting the flavor and you’re getting a modicum of calories and a modicum of sugar as a result of that, but nothing else. And that’s what we really wanted to hold on to — the nothing else, ‘no added.’ And we feel like that’s pretty strong, because some of these other products — and I won’t name names — add things even if it is the natural sweeteners or other flavor systems to get there aren’t always so clean and simple as [compared to] just vegetables.”

While the V8 logo is noticeably smaller than on other products bearing the brand name, McCusker, who, prior to joining Campbell in 2014, spent 16 years at PepsiCo in a variety brand and marketing roles, said that she and her team “chose to enhance the product story, the flavor story.”

“That’s how we prioritized it,” she said. “For that space, for that consumer, they’re actually reading the label. This consumer is turning [the bottle] around and getting close.”

McCusker noted that market research conducted by Campbell found that consumers consistently identify and positively align the V8 brand name with vegetables, something that was key in the positioning and marketing of the water line.

“The original idea was that it was ‘veggie-infused water,'” she said. And we didn’t need to say that, because everyone we tested said that [we] were being redundant. [For them] V8 and veggie are the same thing. All you needed is V8 infused water.”

The initial rollout of V8 Infused Water follows the launch of V8 Vegetable and Fruit Juice Beverages, a line of health-focused drinks that, like the waters, pull from current trends and consumer demand for ingredients like kale and carrots. Unlike water, the new juice blends launched nationally and have been a point of pride for McCusker, who said that she is very happy with trial, repeat and turns for the products. 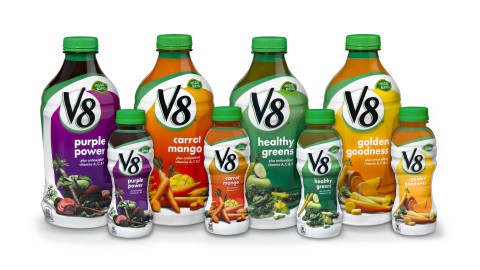 “This is the sweet spot for where juices are going, and we did the right thing in bringing the right variety,” she said. “And I really feel very strongly that one of our points of difference is that we do make these products accessible to a broader percentages of the population.”

McCusker described the target consumer for both product lines as “active and aspiring in their healthfulness.” It’s a mantra that Campbell aspires for all of its current and future offerings, particularly at a time when consumers no longer shun vegetables, but instead seek them out, so long as the format tastes good.

“Consumers are looking for good solutions in their lives that aren’t going to sacrifice flavor, she said. “They embrace vegetables in their lives; it’s no longer about trying to sneak the veggies in, or what we call ‘stealth health.’ It’s really about embracing the vegetables and the healthfulness of our products, and really just putting them in the context of where that consumer is already.”

Describing Target and Walgreens at “great partners for us” (“if you think about the target consumer, this is where they’re shopping”), McCusker said that while shelf-stable is a more predominant part of Campbell’s distribution, making a stronger push to get into convenience and immediate consumption stores is a critical area of growth for V8.

“Grab-and-go cold is a huge emphasis and imperative for me in terms of growing the beverage business,” she stressed.

Part of that effort has emerged in the form of a carbonated extension of the V8 + Energy line, one intended to drive new distribution of brand in immediate consumption outlets. V8’s non-carbonated energy products have been distributed nationally in grocery stores since 2011, and McCusker believes that the new line extension, packaged in a 12 oz. can, plays in a space where there is less competition for a product of that size, as compared to 8 oz. offerings.

As for continued development of the V8 brand, McCusker said that a packaging revamp is on the horizon for the entire V8 business, one that’s “really about an entire refresh and reframing of the brand for the younger consumer.”

And while a planned V8 Energy Shot — one shown at the 2014 National Association of Convenience Stores show — is “on hold,” McCusker made it clear that with regard to any future innovation “the core equity of [V8’s] business is the vegetable juice.”

“It’s extending that equity into other segments of the market where we can bring a value by adding the vegetable juice, and that’s the + Energy and now the V8 infused water,” she said.