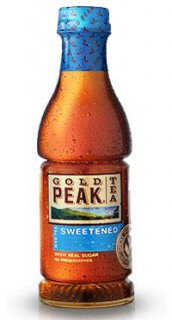 Amid burgeoning demand for iced tea products, the Coca-Cola Co. today announced that Gold Peak and Fuze Tea are two of the newest additions to its portfolio of billion-dollar brands. Retail sales of Gold Peak and Fuze Tea exceeded the $1 billion mark in 2014, as did those of I LOHAS mineral water, a Coke-owned brand that is sold in Japan.

Gold Peak made Coke’s list of billion-dollar brands just eight years after its launch on the market. Sold in a variety of package sizes and flavors, 2014 sales of Gold Peak benefited from an integrated marketing campaign that featured TV, outdoor, print and social media advertising for the brand.

“Gold Peak has one of the best conversion rates in the category, which means once a consumer tries it, they come back and buy it again,” Geoff Henry, group director, tea portfolio, Coca-Cola North America, said in a statement.

As quickly as Gold Peak reached $1 billion in sales, Fuze Tea, a brand extension of Fuze (which Coke acquired in 2007), hit the milestone in only three years. Coke developed and Fuze Tea in 2012 as a way to fill out a distribution gap left by Nestea that year. The Nestle-owned tea brand had been distributed by Coke since 1992, but the companies agreed to alter a long-term partnership allowing for Nestle Waters North America to take over wholesaling responsibilities. Fuze Tea comes in 30 varieties and is sold in ready-to-drink and fountain-dispensed formats in 40 markets around the world.

IRI, a Chicago-based market research company, reported that multi-outlet U.S. sales (including those of C-stores, supermarkets, drugstores, mass retailers, military commissaries and some club and dollar store chains) of packaged, ready-to-drink tea reached $3.2 billion a 52-week period ending on Dec. 28, 2014, up 6.12 percent over the year prior.

Here is Coke’s press release regarding the news in full:

ATLANTA–(BUSINESS WIRE)–The Coca-Cola Company today announced the addition of three brands to its growing roster of beverages that generate annual retail sales of more than $1 billion, bringing to 20 the number of billion-dollar brands in the Company’s portfolio.

Brands from the fast-growing ready-to-drink tea and water categories are the latest additions with Gold Peak tea, available in the United States, FUZE TEA, sold in nearly 40 countries, and I LOHAS mineral water, sold in Japan, joining the Company’s billion-dollar club in 2014.

“We are taking definitive steps to capture the enormous growth opportunities available to us in the global nonalcoholic ready-to-drink beverage industry,” said Muhtar Kent, Chairman and Chief Executive Officer, The Coca-Cola Company. “Through a strong global focus on building locally relevant and innovative brands, our Company, together with a network of strong local bottling partners, has worked to successfully double the size of our billion-dollar brand portfolio in less than a decade.”

Gold Peak and FUZE TEA join Japan’s billion-dollar green tea brand, Ayataka, as the Company’s largest brands in the global ready-to-drink tea category, each of which has been launched since 2006. The success of these brands has propelled the Company’s tea portfolio to substantially outpace the growth of the category globally over the past two years, while gaining market share on both a volume and value basis.

Gold Peak, a premium tea brand developed by the Company, debuted in 2006 and has been growing double digits since its launch. In 2014, the Company launched an integrated marketing campaign for Gold Peak that included national television, print, outdoor and digital and social media advertising. It is one of the fastest-growing national iced tea brands and drove nearly 30% of all dollar growth in the ready-to-drink tea category last year. Gold Peak is sold in multiple varieties, including Sweet Tea, Lemonade Tea, Unsweetened Tea, Diet Tea, Raspberry Flavored Tea and Green Tea.

FUZE TEA launched in 2012 in 14 international markets simultaneously. Since its introduction, the brand has expanded availability to nearly 40 markets around the world, reaching billion-dollar status in less than three years on the market. The FUZE TEA line-up currently features more than 30 varieties, including Black Tea with Lemon, Black Tea with Peach, Black Tea with Lemongrass and Apple, Green Tea with Mango and Chamomile, and zero-calorie Light Tea. FUZE TEA will be launched in additional markets in 2015.

Coca-Cola Japan launched the water brand I LOHAS in 2009. Since its launch, it has become the No. 1 immediate consumption mineral water brand sold in Japan. The Company has taken recent steps to significantly grow I LOHAS with the introduction of a new line of single-serve 515 ml I LOHAS sparkling beverages in plain and lemon flavors as well as a new larger 1,555 ml package in the convenience store channel.

Since 2007, the Company has added 10 brands to its billion-dollar portfolio across a broad range of beverage categories including sparkling, juice, water and tea. Additions include Coca-Cola Zero, Simply, Minute Maid Pulpy, Del Valle, Bonaqua, Ayataka and vitaminwater.

The Coca-Cola Company (NYSE: KO) is the world’s largest beverage company, refreshing consumers with more than 500 sparkling and still brands. Led by Coca-Cola, one of the world’s most valuable and recognizable brands, our Company’s portfolio features 20 billion-dollar brands including Diet Coke, Fanta, Sprite, Coca-Cola Zero, vitaminwater, Powerade, Minute Maid, Simply, Georgia and Del Valle. Globally, we are the No. 1 provider of sparkling beverages, ready-to-drink coffees, and juices and juice drinks. Through the world’s largest beverage distribution system, consumers in more than 200 countries enjoy our beverages at a rate of 1.9 billion servings a day. With an enduring commitment to building sustainable communities, our Company is focused on initiatives that reduce our environmental footprint, support active, healthy living, create a safe, inclusive work environment for our associates, and enhance the economic development of the communities where we operate. Together with our bottling partners, we rank among the world’s top 10 private employers with more than 700,000 system associates. For more information, visit Coca-Cola Journey at www.coca-colacompany.com, follow us on Twitter at twitter.com/CocaColaCo, visit our blog, Coca-Cola Unbottled, at www.coca-colablog.com or find us on LinkedIn atwww.linkedin.com/company/the-coca-cola-company.