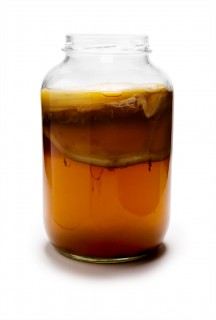 It’s been five years since the so-called “kombucha crisis,” but the issue at the time, that of elevated alcohol levels in the fermented effervescent beverage, remains a topic that continues to bubble up from time to time. In the latest instance, rumors of an impending report on alcohol content in kombucha from industry trade group the American Herbal Products Association (AHPA) has those in the ‘bucha biz buzzing over what the report may entail.

On March 5, the AHPA held its annual member meeting during the 2015 Natural Products Expo West convention in Anaheim, Calif., where the organization’s leadership discussed the upcoming report, according to those in attendance. In an email to BevNET, AHPA President Michael McGuffin acknowledged the organization had “an interest in the subject” but would not comment on the existence of the rumored report.

From a regulatory standpoint, the Alcohol and Tobacco Tax and Trade Bureau (TTB) requires beverages that contain more than 0.5. percent alcohol to be labeled and sold as alcoholic beverages. On March 27, the TTB issued a reminder that kombucha may be subject to such regulation in the bureau’s weekly newsletter, which included the following statement:

“In the past, our tests of kombucha in the marketplace revealed that many of these products contained at least 0.5 percent alcohol by volume. These products are alcohol beverages and are subject to TTB regulation. Regardless of the alcohol content of the finished beverage when it leaves the manufacturing facility, when kombucha contains 0.5 percent alcohol or more by volume at any time, it must be produced on qualified premises subject to TTB regulation.”

Meanwhile, Kombucha Brewers International (KBI), a trade group representing kombucha companies, has announced the publication of newly developed testing protocols to ensure its members are in compliance with the aforementioned TTB regulations. KBI first presented the proposed testing measures to its members in February at its second annual KombuchaKon conference and has since published the official KBI Approved Alcohol Testing Methodology in full on its website.

TTB-certified Cornerstone Labs and KBI have developed a sample handling protocol to improve the accuracy and consistency of alcohol test results for kombucha products on the market. According to KBI President Hannah Crum, the protocol is built on the testing methodology already in place by the TTB, gas chromatography with mass spectrometry, but specifies sample handling and preparation protocols that have been identified as critical for producing accurate and repeatable compliance testing. Other methods often used in the marketplace such as Anton Paar or gas chromatography without mass spectrometry are less reliable and therefore not recommended for official testing. Even with mass spectrometry, failing to following the aforementioned handling procedures has been shown to commonly yield false positive results.

“For most testing, a margin of error of plus/minus [of] 1 percent would be considered reasonable but in the case of kombucha we have to get it exactly right and that’s what these sample handling protocols ensure,” said Sam LaBonia, President of Cornerstone Labs.

The issue of fermentation on shelf has dogged the kombucha category since 2010, when Whole Foods Market pulled the beverages from its shelves following a voluntary recall from brands, stemming from concerns over alcohol levels in the beverage. But the segment bounced back from the setback and is now poised to reach $500 million in retail sales this year. Still, companies worry that another disruption could cut their momentum, as it did for several brands in 2010. Category leader GT’s came out stronger, reformulating its product to be in compliance and relaunching its classic formula as a product manufactured, distributed and sold as an alcoholic beverage, but other brands like Vibranz and Honest Tea’s kombucha line ultimately discontinued their production.

While the nature of the AHPA’s report remains to be seen, and companies who have heard about it haven’t heard much outside of murmurs and speculation, it’s clear that the kombucha business isn’t out of the woods yet on this issue.

“Part of the impetus behind founding KBI came from what occurred in 2010, where it became obvious that as an industry we didn’t have an organization to operate as a focal communication point,” Crum adds. “Since our launch we’ve been working on setting up best practices and standards for our industry so that we can self-regulate.”