A year and a half after the launch of Vita Coco Lemonade, the coconut water giant has returned with its take on another summertime staple, that of an Arnold Palmer. Vita Coco today announced the launch of a new “Lemon Tea” variety, a blend of coconut water, black tea, sugar, lemon puree and natural lemon flavors. The product contains 55 percent juice and is produced in Malaysia.

Vita Coco Lemon Tea contains natural caffeine by way of the black tea, however unlike its Vita Coco Cafe product, the beverage won’t be marketed as providing an energy boost. Instead, it will be positioned as a functional hydration and refreshment drink akin to the rest of Vita Coco’s coconut waters, according to company spokesman Arthur Gallego. The launch of the product follows that of Vita Coco rival O.N.E., which earlier this year introduced two coconut water and tea blends, coming in wild orange and tropical colada flavors. 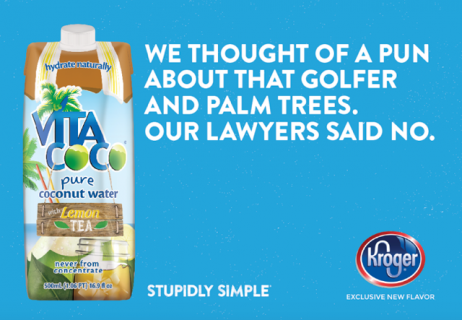 Packaged in Vita Coco’s familiar 500 mL Tetra Pak carton, the beverage will be made available exclusively at Kroger supermarkets through the end of the summer. Vita Coco Lemon Tea will pick up at-retail and digital promotion as part of Vita Coco’s “Stupidly Simple” campaign.

As for whether Vita Coco will pursue other tea-infused products in the future, Gallego said the brand has “a robust innovation pipeline,” but declined to comment on any other upcoming product launches.

The company’s full press release can be found below:

The Lemon Tea flavor is available in 500ml size only and is exclusively sold at Kroger stores, chain-wide.

As with all Vita Coco beverages, fresh coconut water forms the foundation. Blended with black tea, sugar, lemon puree and natural lemon flavoring, Lemon Tea is a refreshing update on the classic drink, enhanced by the functionality of coconut water.

Vita Coco’s four other flavored coconut waters, which include Pineapple, Peach Mango, Orange and Lemonade, have shown to be a popular point of entry for new consumers to the coconut water category. After the successful launch of the Lemonade flavor in 2014, Vita Coco decided to capitalize on the popularity of lemon as an ingredient and created Lemon Tea.

Vita Coco Lemon Tea, which has a suggested retail price of $2.79, will also be sold on promotion at Kroger locations and merchandised with humorous signage and other POS tied to Vita Coco’s recently launched “Stupidly Simple®” campaign.