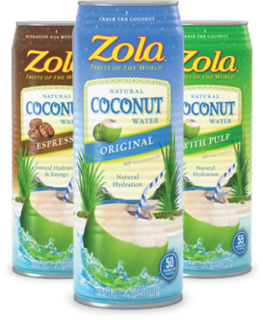 While a pioneer of acai-based beverages, it is nevertheless coconut water has become the primary driver of growth for Zola. The company today announced that, based on sales data from SPINS, a provider of syndicated market research, Zola is now the fourth best-selling coconut water brand in the conventional channel, passing PepsiCo-owned Naked.

The rapid development of Zola’s coconut water products, which debuted in 2012, has paved the way for a dramatic expansion in the distribution of its products, including new placement of the brand in 2,600 natural and grocery chain locations in the Northeast, Southeast, Pacific Northwest and West Coast.

In a release announcing the news, Zola stated that it has secured new shelf space in Kroger, Winn-Dixie, BI-LO and its subsidiaries, Giant Food, Giant Food Stores and Sprouts locations. The company also landed placement in Stop & Shop locations in Boston and New York and expanded its offerings in Whole Foods’ Southern Pacific division. Zola will support the expansion with dedicated merchandising teams in each market, the company said.

While the growth of its coconut water products has helped Zola make strides in mainstream grocers, similar expansion efforts are said to be the cause of an overall decline in dollar sales within the category. In a December article on examining coconut water sales in natural and conventional channels, Mary Ellen Lynch, Director of Consumer Insights and Strategic Partnerships, SPINS, told BevNET that “the mainstreaming of the segment is putting downward pressure on price which also contributes to flatter growth.” Representatives from a variety of coconut water brands disputed her conclusion, pointing to sales data showing steady and continued development of the category.

Zola is the fastest growing coconut water brand in both conventional grocery and natural foods channels.[1]  Recently, sales of Zola Coconut Water surpassed Naked Coconut Water, securing the #4 position in the conventional grocery channel.[2]  “We are ready to build on our momentum with new distribution in major grocery chains and the second largest natural food retailer in the country,” said founder and CEO Chris Cuvelier.  The company will launch products in OR, WA, AZ, CO, SoCal, TX, FL, CT, NY, NJ and MA with dedicated merchandising teams to support the accounts and build the Zola brand in these new markets.  In addition to this expansion, Whole Foods Market has recently expanded their offering of Zola products in the Southern Pacific division.  “At Zola, we listen to our consumers to create the very best products and partner with our retailers to deliver strong in-store programs that drive sales.  We look forward to executing our growth plan for a successful 2015 and commit to delivering exciting new products to meet our consumer’s needs,” says Cuvelier.

Zola was founded in 2002 and is the maker of top-selling Coconut Waters and Acai Juices in the United States. We are fanatical about traveling the globe in search of the best ingredients. Our philosophy is to go directly to the source, and our promise is to produce only the best-tasting, most nutritious products. Zola’s products include Coconut Water Original, Coconut Water with Espresso, Coconut Water with Pulp and Coconut Water Lemonade. Zola is also the maker of the fastest selling Acai juices in the United Statesincluding Original Acai, Acai with Blueberry and Acai with Pomegranate. All products are available at grocery and natural food stores across the U.S. and Canada. For more information about Zola, please visit us onFacebook, Instagram, Twitter and at www.LiveZola.com.