Los Angeles, CA (July 2016)— Whether running 30 miles or 100 miles, ultra runner Caleb Denton knows the importance of staying hydrated to finish strong. A relative newcomer to the sport, and a very early success, Caleb knows that to run 30 plus miles during these races, he must properly prepare both mentally and physically. His pre-race ritual always includes a refreshing and hydrating coconut water to give his body the necessary potassium, calcium, and magnesium to perform throughout the race. With a 95% win rate in the Ultra Race circuit, Denton recently joined Amy & Brian’s team of Brand Ambassadors. Denton’s commitment to the sport, his family, faith and country make him a perfect fit and welcome addition to the Amy & Brian Coconut Water(www.amyandbriannaturals.com) team.

“We could not be happier to have Caleb as a part of our team here at Amy & Brian! He embodies everything we are striving to achieve as a brand,” says Peggy Chung, of Amy & Brian. “We are confident his drive and motivation will help inspire our customers to truly live the Be Better lifestyle and to reach for their own personal goals.” 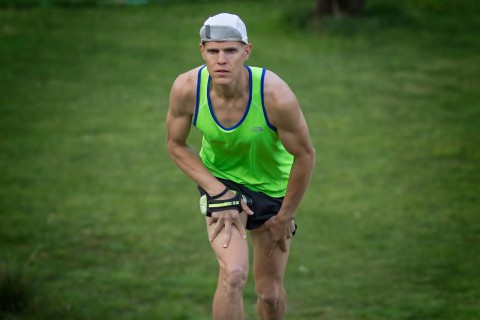 A proud father and husband, Denton joined the National Guard in 2009 and when he was deployed in Fall 2014, he began running as a way to keep his mind occupied on goals instead of dwelling on being separated from his family. With no previous experience as a runner, he soon decided to run the Air Force half marathon with just one month of preparation and a month later he ran the Marine Corp. marathon where he placed 3rd. After returning home in November 2014 he quickly began training for his first Ultra Race, a 50k in March 2015. Denton placed 1st in the grueling competition and knowing he had found his purpose, hasn’t stopped running since.

“When you train as much as I do, at least 100 miles a week, replenishing those lost electrolytes is key to my performance. Amy & Brian’s coconut water is essential to me staying replenished all week long,” says Denton. This Tennessee native is inspiring those around him by showing that with motivation and drive to truly Be Better, you can achieve anything.

A family-owned business that actively supports all people aiming to Be Better, Amy & Brian looks forward to supporting Denton as he continues on the ultra racing circuit. The next race for Caleb will be the Iron Mountain Trail Race, a 50 mile race in Damascus, VA held on September 3, 2016. He finished 2nd in this same race last year, just minutes shy of the track record, and has hopes to head home with a gold medal the second time around! His passion combined with his skills has allowed him to already make a name for himself in his field as he pushes himself every day to Be Better with Amy & Brian.

Amy & Brian Naturals, a family run business, has been selling coconut water for over a decade. Sourced only from young green Thai coconuts, Amy & Brian coconut water has a natural sweetness and well-rounded coconut taste with no added sugar. Available in a variety of flavors (including lime, grape and cinnamon) and sizes, Amy & Brian is passionate about giving consumers a great tasting product. Amy & Brian Coconut Water can be found with or without pulp in mainstream and natural specialty supermarkets throughout North America.

For further information about Amy & Brian Naturals, visit www.amyandbriannaturals.com. For media related inquiries, product samples, or to set-up an interview with David Hollister of Amy and Brian Naturals, please contact Rachel Czyzynski of Christie Communications at (805) 969-3744 or via email atRachel@christiecomm.com.