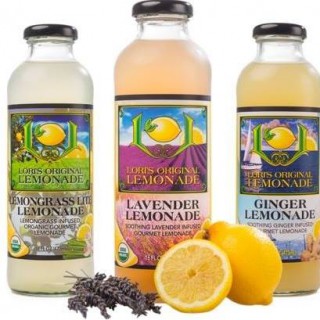 Lori’s Original Lemonade, a producer of USDA Certified Organic uniquely infused lemonades announces that this week all three flavors, Award Winning Lavender Lemonade, Ginger Lemonade and Lemongrass Lite Lemonade will be stocked on the shelves of Sprouts Natural Markets in the entire California chain of 85+ stores. Lori’s Lemonade is packaged in sustainable 16 oz glass bottles wrapped with beautiful labels with each flavor sharing a story about Lori’s startup and family.

Created in 2011, Lori’s Original Lemonade was born from a recipe in Lori’s kitchen, one that she made for her kids lemonade stand in Ojai years ago. With growing college debt for her three kids, and losing her part time job, Lori decided to contribute by commercially bottling her signature Lavender Lemonade. Each lemonade is uniquely infused with herbs and spices and local ingredients whenever possible, providing a superior beverage with a bold, fresh and pure taste that you can experience as soon as you open the cap.

In 1943, Henry Boney began Sprouts’ longstanding legacy of providing fresh, natural food available to anyone interested in eating well and spending less when he opened a San Diego fruit stand.

Our company was founded by members of the Boney family, long-time San Diego grocers with a focus on making fresh foods affordable. Our founders opened the first Sprouts store in Chandler, Ariz. in 2002 with abundant produce and thousands of natural, organic and great-tasting foods at remarkably low prices.

Sprouts became a public company traded on the NASDAQ Stock Market in August, 2013. In recent years, we expanded into the Southeast by adding new stores in Georgia, Missouri, Alabama and Tennessee. Today, Sprouts is one of the fastest growing retailers in the country. Sprouts employs more than 24,000 team members and operates 250 stores in 13 states from coast to coast.

Lori’s Original Lemonades Chief Believer/Founder Lori Volk created her signature drink, Lavender Lemonade for her children’s lemonade stand years ago. However out of financial necessity to defray mounting college debt for her three children, Volk turned to bottle her lemonade commercially in Feb 2011. Lori works closely with the community and is actively involved in fundraising events for local organizations. For more information visit www.LorisOriginalLemonade.com and where to find Lori’s Original Lemonade near you.About LoriLori, mom of three, is a graduate of California State University Channel Islands with a degree in Psychology and over 30 years in sales and marketing. In November 2012, Lori completed an Ironman triathlon in Arizona, a grueling 140.6-mile race. Lori’s motto, “Wish it, Dream it, Do it” hopes to inspire others to follow their dreams. Lori and her husband Tom live aboard their sailboat in Southern California.

If you would like more information on this topic, please contact Lori Volk at 805.640.6565 or email at sales@lorisoriginallemonade.com