Monster Chairman and CEO Rodney Sacks said that Mutant and Hydro were designed to directly compete with PepsiCo-owned Mountain Dew and Mtn Dew Kickstart, particularly in the convenience store channel. Monster will lean on its strategic distribution partnership with The Coca-Cola Co. to bring the new products to market.

“We are putting our resources together to basically go after… the leading CSD in the convenience space, which is Mountain Dew and is really attacking us on our flanks,” Sacks said, according to The Press Enterprise. “We are going to target and position it in the CSD doors.”

Packaged in a 20 oz. green plastic bottle, Mutant will feature a tagline of “refreshment energized,” and product labels that state, “there’s nothing soft about this drink.” Although the Monster brand name does not appear on the front label, Monster’s familiar “claw” logo appears below the word Mutant. The beverage will be priced at $1.99 and is expected to launch in the third quarter of this year.

Mutant will be manufactured by Coke, and is an extension of a strategic partnership between Monster and the soda giant. Last year, Coke acquired a minority stake in Monster and became “preferred global distribution partner” for Monster energy drinks. The deal also included a swap of Coke’s energy drink brands and Monster’s non-energy portfolio. 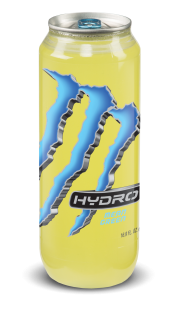 Meanwhile, Hydro will target active consumers and be positioned as an alternative to enhanced waters and sports drinks. Hydro will be come a in 16.9 oz. PET can with an aluminum top; the innovative can was developed by Invento. The beverage will have a price point of $2.69-$2.89 — similar to that of Monster’s core 16 oz. line — and come in four varieties. The launch of Hydro is planned for the fourth quarter of 2016.

Sacks was careful to note that Monster’s “target is not to put [Mutant and Hydro] in the energy door and not to put it in the Coke door.” Instead, the goal is to add incremental shelf space for the company and win over consumers of Mountain Dew and other CSD brands.

In a memo, Bonnie Herzog, Managing Director – Beverage, Tobacco & Convenience Store Research, Wells Fargo Securities, LLC, identified the launch of Mutant and Hydro as a powerful opportunity for Monster to leverage “the entire Coke distribution system “on a scale significantly larger than its previous launches of [Monster] Ultra and Rehab.”

“This opportunity should not be underestimated in our view!” Herzog wrote. “Importantly, we note that neither Mutant nor Hydro will directly compete with any of [Coke’s] products which should dispel concerns about distribution within the Coca-Cola system, and believe the biggest losers of shelf/cooler space will be [Pepsi] and underperforming waters.”