The four-SKU line, which was first showcased in March at Natural Products Expo West 2017 in Anaheim, Calif., will be arriving on shelves next week. The milk is packaged in 48 oz. multi-serve bottles and has a suggested retail price of $4.99. Each variety– Unsweetened, Original, Vanilla and Chocolate — is vegan, soy-free and contains 10g of protein per 8 oz. serving, along with 450 mg of calcium. 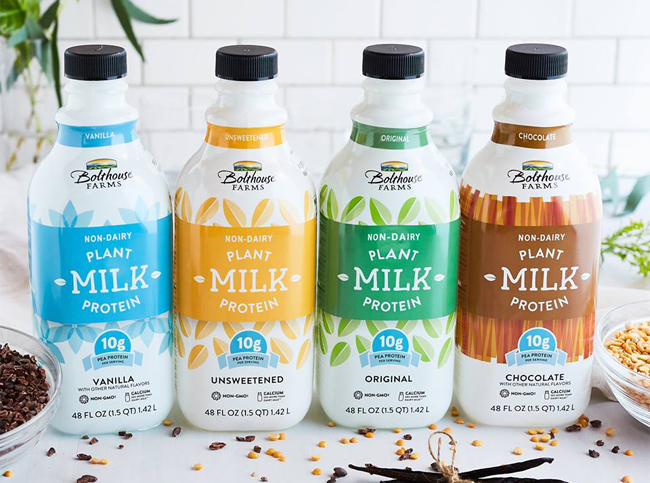 Speaking with BevNET, Suzanne Ginestro, chief marketing and innovation officer at C-Fresh, a Campbell division that oversees the Bolthouse brand, among others, said that after conducting market research, the company identified taste, protein and calcium as the key aspects consumers are seeking in plant-based alternative milks.

“By working with industry partners, we could source a yellow pea that would give us the lightness and taste and texture that would deliver for this product,” she said. “The industry and technology is moving so quickly that you are able to separate ingredients and get just the protein in a way that doesn’t compromise on other things.”

The launch of Plant Protein Milk positions Bolthouse as direct competition to Ripple Foods, the Emeryville, Calif.-based brand that has raised over $30 million in private equity funding off the strength of its range of pea-based milks. Ginestro said that the Bolthouse line would stand out from its main competitor, as well as other nut-based dairy alternatives, by virtue of its 10g of protein, as compared to 8g for Ripple, and fortification with vitamin B12.

Ginestro said the line is being rolled out on a customer-by-customer basis, and will focus on meeting demand from conventional grocery retailers, whom she said are “really eager to have something like this.” Plant Protein Milks will be available at retailers like Kroger and Shaws, as well as in 13 divisions of Safeway.

As to how the new Bolthouse line fits into the overall C-Fresh strategy, Ginestro noted that Plant Protein Milk brings the brand into the dairy section for the first time, after having established a strong presence in the deli and produce departments. Bolthouse’s existing six-SKU Protein Plus line features a combination of whey and soy proteins and is merchandised in the produce section.

In a signal of its interest in the broader plant-based space, Campbell announced in July it had entered into an agreement to acquire Pacific Foods, which produces a range of products including shelf-stable, plant-based beverages, for $700 million in cash.

C-Fresh, which saw a 1 percent of rise in sales along with $8 million in losses last quarter, has previously stated its goal of seeking “full force growth in the perimeter of the store.” Ginestro suggested that Plant Based Milk’s performance at retail would be an indicator of the prospects for further expansion into dairy products.

“Assuming that this launch goes well and people love the product as much as we do, I imagine we would continue to innovate in the category,” she said.