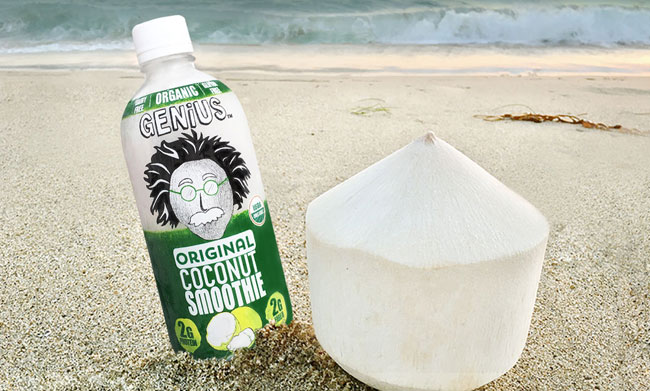 Approximately a year after Genius Juice discontinued its flagship coconut smoothie line, the beverage maker is shifting gears once again with a relaunch of its original product.

Speaking to BevNET, Genius Juice founder and CEO Alex Bayer said the company never wanted to discontinue its smoothie line, which is made from both the water and meat of Thai-sourced coconuts, but that the company’s distribution had grown too wide for its manufacturing capabilities. The company attempted to rebrand with a line of “Superfood Smoothies” which ultimately proved less popular than the coconut line, leading some retailers to drop the brand.

Now, the company has partnered with a manufacturer that can handle the demand for the smoothie, Bayer said. Genius has since decided to drop its superfood smoothie line and will begin rolling its coconut offering out to stores again in Q4 of this year.

“I can tell you that we received countless e-mails and calls and requests from buyers to bring it back for the last year,” Bayer said. “So this is definitely from popular demand and we’re happy to finally have it back on the shelf and in our customer’s hands.”

Bayer said the transition back to the original formulation is going smoother than anticipated. Retailers that dropped the brand are coming back on, including Natural Grocers, as well as Whole Foods where the relaunch will enter three regions, having previously been available in five regions. Bayer explained that the goal for the rest of this year is to “stabilize” and get back to its 2016 distribution footprint, before seeking out new channels and buyers in 2018.

“The most difficult part of this journey has been the pivot,” Bayer said. “But this whole time during the pivot I was able to find the right manufacturer to bring the coconut smoothie back because I know that’s the winner. That’s what’s going to grow the company in my opinion to a $50-$100 million brand.”

The tightened supply chain has also lead to improvements in freshness, Bayer said, but otherwise the formula is unchanged. The product still sells for its original SRP of $6.49 to $6.99 per 12 oz. bottle.

To support the relaunch, Genius Juice has redesigned its website and plans to run a social media marketing campaign. Bottles in stores will contain tags advertising the line’s comeback.

According to Bayer, the company is exploring additional SKUs for the coconut smoothie, including a possible coffee blend that was in development last year, but currently there are no plans for new releases until after the brand has stabilized its retail presence. Eventually, the company hopes to have three-to-five SKUs in its coconut line. While the door is also open for the superfood smoothies to return some day, Bayer said the line did not conform to the brand’s identity and was not differentiated from similar nut-based smoothies on the market.

“Your heart has to be in it 100 percent,” Bayer said, reflecting on lessons learned from the past year. “What’s gotten Genius and our team through all the ups and downs is our belief and passion for the product. And now that it’s back on shelves, and we have a strong manufacturing partner, the sky’s the limit.”