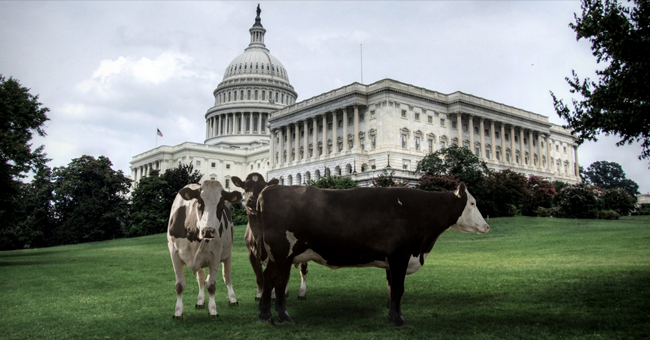 The Dairy Pride Act has lit a fire under the feet of plant-based food and beverage producers fighting against regulations that would forbid the usage of terms such as “milk,” “cheese,” and “yogurt” on non-dairy product labels.

Last week, the 18-month-old Plant Based Foods Association (PBFA), in collaboration with the Soyfoods Association and Good Food Institute, hosted its first fly-in lobbying week in Washington, D.C. Representatives from dairy alternative producers including MALK, Good Karma Foods, New Barn and Oatly traveled to Washington to meet on Wednesday with the staff of members of congress who are friendly or neutral on the issue of dairy labelling in order to argue against the Dairy Pride Act. The two-day program also included a luncheon on Thursday.

According to Michele Simon, executive director of the PBFA, the organization is in favor of codifying universal terminology for plant-based products and has conducted consumer surveys to determine which terms would be best. However, the Dairy Pride Act threatens to disrupt the growing dairy alternative category by banning the usage of phrases such as “almondmilk” and would require massive packaging revamps that the PBFA fears would severely impact startups while doing little to increase sales for the dairy industry.

“I’ve been ironically grateful to the dairy lobby for this gift of the Dairy Pride Act because it’s really given PBFA and our members an opportunity to introduce ourselves to members of Congress with a specific ask,” Simon told BevNET. “And then of course we can talk about other issues and challenges.”

Introduced by Sen. Tammy Baldwin (D-WI), the bipartisan bill was read on Jan. 12 and referred for action to the Senate Committee on Health, Education, Labor, and Pensions — the committee which oversees the FDA — but has yet to be picked up for discussion. In March the bill picked up three cosponsors in Sens. James Risch, Debbie Stabenow, and Angus King, and was later supported throughout the summer by Sens. Mike Crapo, Chris Murphy, and Gary Peters. However, the bill has yet to be discussed in committee, a hint Simon said that it may not move much further.

According to Simon, the concern now is that the dairy lobby is now turning its efforts toward getting elements of the bill added as amendments to larger legislation such as an appropriations or farm bill next year. By lobbying now, the PBFA hopes to pre-empt such a tactic.

According to Chris Galen, spokesman for the National Milk Producers Federation (NMPF) which is a strong supporter of the Dairy Pride Act, the dairy lobby’s interests are not dependent on the bill. Rather, Galen said, the NMPF hopes the bill’s presence will prompt the U.S. Food and Drug Administration (FDA) to take action to update and enforce existing regulations regarding dairy and dairy alternative labelling.

“The Dairy Pride Act is a means to an end, but it’s not the greater end itself,” Galen told BevNET. “The greater end is getting the FDA to act. We view this as a two-pronged approach — one is generating support in Congress for the Dairy Pride Act. But that’s almost secondary to the bigger picture which is getting the FDA to finally enforce the standards that they’re not enforcing right now.”

If neither tactic works, getting the law passed as amendments to other bills is part of the group’s legislative strategy. The current session of Congress, he said, has proven to be paralyzed when it comes to passing bills and dairy is not a top priority for a Senate which has struggled to deliver promised health care and tax overhauls. As such, lobbying the FDA remains a key focus for the NMPF. Last month, the NMPF sent a letter to FDA commissioner Scott Gottlieb urging action on the labeling issue.

The group has also begun taking aim at nutritional claims made by specific brands, such as Urban Remedy, launching a “Dairy Imitator Gallery” on its website designed to educate about dairy alternatives lack of nutrients compared to dairy products.

But some in the dairy industry worry that the cow may have gotten outside of the fence. Mike McCully, owner of The McCully Group which provides management consulting for dairy and food companies, told BevNET he wasn’t sure if the bill had traction or not as the dairy alternative category has become an increasingly large presence in the market, now valued at more than $1 billion.

“If this had happened 20 years ago or so it would have been more liable to get some government action on it,” McCully said. “If you look at it from the pure technical piece of it plant-based beverages should not be called milk, if you follow the letter of the law. But I think over the years the FDA has typically not gone after labelling issues. They’re concerned about food safety.”

According to Galen, the issue of food labeling is nonpartisan, as the dairy lobby has failed to get the FDA to enforce its labeling rules over the past several decades, despite repeated attempts dating back to at least the George H.W. Bush administration. But McCully hopes there may finally be an opening for action.

“They’ve been working on this years,” he said. “Part of it is the environment is obviously a little different today so maybe they think there’s an opening to get this legislation passed. The hope would be maybe they have a more friendly audience now within the FDA to listen to this.”

As dairy alternatives continue to grow, however, larger companies are continuing to dip their hands into plant-based products. The PBFA, which currently includes 87 member companies, recently added Campbell Soup Company to its ranks. The group’s lobbying efforts last week were also aided by Blue Diamond. According to McCully, past efforts by dairy to enforce the regulations have been complicated by major dairy producers double dipping into plant-based offerings, and as the category grows it is likely more dairy companies will begin offering their own versions of nutmilks.

Moving ahead, the PBFA is also optimistic that in the event the Dairy Pride Act does pass in some form, it can be challenged on constitutional first amendment grounds. According to Simon, the organization is ready to argue that labeling regulations would infringe on plant-based food and beverage producers freedom of speech.

“This issue has percolated for a long time and it’s had some phases where it’s peaked, like the one we’re in now with the push of the Dairy Pride Act,” Radi told BevNET. “But the reality is the consumer has been voting for the better part of two or three decades, increasingly toward plant-based milks.”

However, for the dairy industry and the NMPF, silence from the federal government is no longer acceptable, and the time to act is now.

“We’ve made so much noise on this, it’s going to be hard for the FDA to ignore,” Galen said. “Congress is no longer ignoring it. In a certain sense, the legislation moving forward will hopefully prompt FDA to take action.”