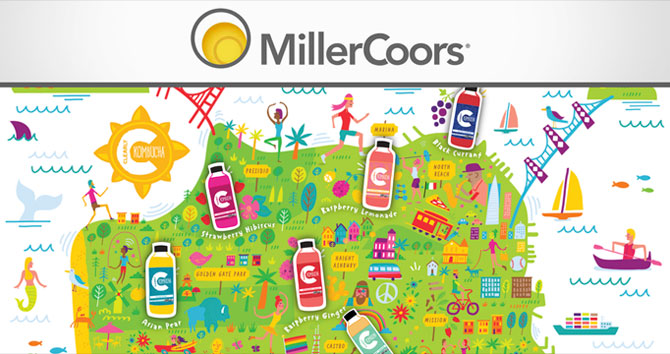 Terms of the transaction, which closed on June 1, were not disclosed.

The deal was led by TAP Ventures, a division within Molson Coors’ enterprise growth unit that launched last year and is tasked with identifying investment opportunities outside of the traditional beer segment.

“The TAP Ventures team has been looking into opportunities in the kombucha space for the past year and identified Clearly Kombucha as an attractive company based on the growth of the health and wellness category, as well as the strength and expertise of the Clearly Kombucha team,” a Molson Coors spokesman wrote in an email to BevNET.

Those moves are aimed at providing Molson Coors’ U.S. distributors with beverage options that “don’t compete with beer,” the spokesman added.

Clearly Kombucha, founded by Alison Zarrow and Caleb Cargle in 2009, will be integrated into Tenth and Blake, the craft and import division of Molson Coors’ U.S. division, MillerCoors. The company produces six SKUs of organic kombucha, as well as a line of fermented botanical drinks available in five flavors called C-Botanicals, and is distributed primarily on the West Coast and Pacific Northwest.

“Kombucha is obviously a fast growing category that we think is gaining steam,” Tenth and Blake president Pete Marino told BevNET. “It’s something that we think has a lot of staying power behind it. Clearly Kombucha makes terrific products, so it’s about as simple as that.”

“She is putting forth the plan and working in collaboration with myself and other people in the business to make sure we’ve got the best plan to make sure we are growing Clearly Kombucha smartly,” Marino said.

MillerCoors would look to integrate Clearly Kombucha into its distribution network “as much as we can,” Marino said, adding that the company plans to expand the brand beyond its current distribution footprint. However, individual beer distributors will have the opportunity to make the final decision about whether they want to carry the brand.

Clearly Kombucha did not immediately respond to BevNET’s request for comment.

In a statement posted to its Facebook and Instagram pages, Clearly Kombucha described the deal with Molson Coors as a “partnership” that would enable it to “grow the CK brand in exciting ways.”

“Rest assured we will remain heavily involved in the business, crafting authentic fermented beverages while leveraging new and exciting expertise in developing great flavors, innovation, and amplifying our portfolio of products to provide more options to more people in more places,” the company said.

The acquisition follows a broader movement toward non-beer investments from larger brewing companies.

For his part, the Molson Coors spokesman added that TAP Ventures “looks across the beverage industry” for opportunities where it can leverage it “branding, brewing and distribution expertise.”

“In particular, we are interested in investing in beverage companies where the product is brewed, fermented or distilled,” he said.