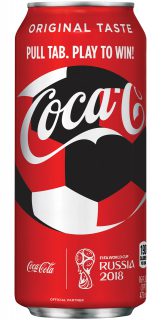 Fans have a chance to get into the games in what’s anticipated to be approximately 61,000 participating 7-Eleven stores in 15 countries – the United States, Canada, Mexico, Japan Thailand, Singapore, China, Malaysia, Vietnam, Taiwan, Korea, Norway, Denmark and United Arab Emirates (UAE) – and Hong Kong.

Each country is putting its own spin on the international football/soccer tournament with exclusive Coca-Cola 2018 FIFA World Cup products, prizes and promotions, available while supplies last.

“This program was built from the ground up with input from key stakeholders around the world and designed with varying pathways to give each country the opportunity to participate in a way that made sense for their market,” said Jennifer Hale, Global Director, Shopper Marketing Strategy at Coca-Cola.

“When 7-Eleven first teamed up with Coke for the 2014 World Cup, we had, about 35,000 stores participating. This year, that number is almost double,” said Jerome Del Porto, 7-Eleven vice president of international operations. “That’s more stores than any other international retailer or restaurant. 7-Eleven wanted to play big to match the enthusiasm of its fans around the world. Thanks to the support of Coca-Cola, 7-Eleven was able to take the field with the biggest international promotion in company history.”

Held in Russia this year, the quadrennial games run from Thursday, June 14, to Sunday, July 15, with 64 matches before the final game to determine the world champions. The 2014 FIFA World Cup™ drew 3.2 billion viewers, equal to almost half of the world’s population.

7‑Eleven, Inc. is the premier name and largest chain in the convenience-retailing industry. Based in Irving, Texas, 7‑Eleven operates, franchises and/or licenses more than 66,000 stores in 17 countries, including 11,600 in North America. Known for its iconic brands such as Slurpee, Big Bite and Big Gulp, 7‑Eleven has expanded into high-quality salads, side dishes, cut fruit and protein boxes, as well as pizza, chicken wings, cheeseburgers and hot chicken sandwiches. 7‑Eleven offers customers industry-leading private-brand products under the 7-Select brand including healthy options, decadent treats and everyday favorites at an outstanding value. Customers also count on 7‑Eleven for bill payments, self-service lockers and other convenient services. Find out more online at www.7-Eleven.com, via the 7Rewards customer-loyalty platform on the 7‑Eleven mobile app, or on social media at Facebook, Twitter and Instagram.