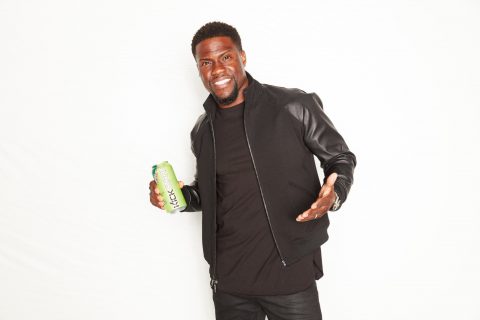 PURCHASE, N.Y. — Today Mountain Dew unveiled its “Give Your Head a MTN DEW KICKSTART” campaign, featuring actor, comedian and overall hardest-working-man-in-show-biz, Kevin Hart. This marks the first time DEW Nation will see Kevin, the face of the brand, in a DEW commercial, venturing inside his head – literally – as he drinks a MTN DEW KICKSTART.

As with everything Kevin does, fans should expect the unexpected in this series of 15-second spots, which play off what’s going through his head while he’s getting pumped up with a MTN DEW KICKSTART. In “Wrestler,” WWE Hall of Fame Legend ‘Mean’ Gene Okerlund interviews Kevin, who channels his convincing wrestling persona, and makes DEW Nation wonder if we’ll see the comedian in the ring one day. In “Slap,” which debuted this past weekend during the NBA Playoffs, viewers got double the Kevin as he gets psyched before playing basketball. Rounding out the three spots is “Chopper,” which features Kevin revving the engine to his newest set of wheels – a neon-green colored motorcycle.

“People always wonder what goes on in my head and I don’t blame them. There’s a whole lot going on in there folks, and now you finally get to see what pumps me up — spoiler, it’s me,” said Kevin. “What’s great about this MTN DEW KICKSTART partnership is that we get to have fun with it. Between bringing a fan courtside at a NBA Playoff game to filming these commercials, I’m proud of the work we’re doing and hope the fans will enjoy it, too.”

The commercials are part of the year-long partnership between Kevin and MTN DEW KICKSTART that includes a 360-degree marketing campaign (TV, digital, social and experiential) and integration with Kevin’s Irresponsible Tour.

“These commercials perfectly capture the energy Kevin Hart is known for, while depicting the refreshing boost fans can expect from MTN DEW KICKSTART,” said Chauncey Hamlett, senior director of marketing, Mountain Dew. “You drink a MTN DEW KICKSTART and it’s as if there is a little Kevin Hart inside your head pumping you up, fueling your work ethic in pursuit of whatever it is you’re chasing. We love the parallels between Kevin’s mentality and our brand, and the collaboration on real-time opportunities and larger campaigns like this have been second to none.”

The partnership was announced at NBA All-Star 2018 with the ‘Closer Than Courtside’ campaign, which included a pop-up experience dubbed Courtside Studios and the launch of the #CourtSidekickContest. The winner of the contest recently joined Kevin courtside at a NBA Playoff game.

DEW Nation can watch the three commercials on MTN DEW social channels, and visit MountainDew.com/Kickstart for product information on the full flavor lineup.

PepsiCo products are enjoyed by consumers more than one billion times a day in more than 200 countries and territories around the world. PepsiCo generated more than $63 billion in net revenue in 2017, driven by a complementary food and beverage portfolio that includes Frito-Lay, Gatorade, Pepsi-Cola, Quaker and Tropicana. PepsiCo’s product portfolio includes a wide range of enjoyable foods and beverages, including 22 brands that generate more than $1 billion each in estimated annual retail sales.

At the heart of PepsiCo is Performance with Purpose – our fundamental belief that the success of our company is inextricably linked to the sustainability of the world around us. We believe that continuously improving the products we sell, operating responsibly to protect our planet and empowering people around the world enable PepsiCo to run a successful global company that creates long-term value for society and our shareholders. For more information, visit www.pepsico.com.

Kevin Hart is currently touring the U.S. on the widely successful and massively hysterical “The Kevin Hart Irresponsible Tour.” Kevin will cover the globe hitting over 115 cities across the U.S., Canada, Europe, Australia and Asia.

Hart’s last multi-city domestic and international WHAT NOW comedy tour sold out large venues all over the world, including being the first comedian to sell out an NFL stadium, selling over 50,000 tickets in one show at Lincoln Financial Field. Internationally, he sold out over a dozen arenas in the European market, selling over 150,000 tickets, and sold out arenas across Australia, selling 100,000 tickets. Hart’s hit comedy tour grossed over $100 million worldwide. 2017 was a banner year for Hart, his memoir I Can’t Make This Up: Life Lessons debuted at Number One on the New York Times Bestseller list and remained on the list for ten consecutive weeks. The book also topped records on the Audible platform, selling over 100,000 copies in the first five weeks. To close 2017, Kevin appeared in the Sony reboot of the classic film Jumanji alongside Dwayne Johnson and Jack Black. Jumanji has grossed over $950 Billion dollars to date, making this Kevin’s highest grossing box office release to date, and Sony’s highest grossing Domestic film ever. Hart’s newest business venture is his digital platform the LOL NETWORK – Laugh Out Loud, the comedy brand and multi-platform network founded by Hart in partnership global content leader Lionsgate. Hart’s next feature film is Night School for Universal, a film in which he co-wrote, produces and stars in – all under the Hartbeat production banner. The comedy follows a group of misfits who are forced to attend adult classes in the longshot chance they’ll pass the GED exam.