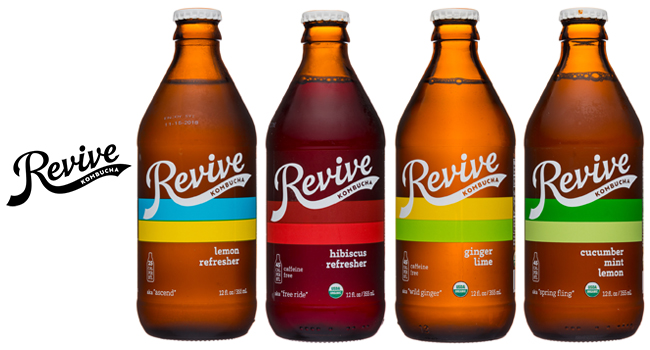 California-based Revive Kombucha has unveiled a new look for its 12 oz. glass bottles featuring a simplified and streamlined visual identity that founder Sean Lovett said would bring greater attention to the liquid itself.

“We wanted to let the ingredients be the star of the show,” said Lovett, speaking about the new design during a call with BevNET. “The one clear idea we had is that less is more. How can we describe more to the consumer with a less busy package?”

The new design is clear pivot from Revive’s previous labels, whose vibrant colors and playful iconography Lovett said helped give the brand a clear personality and visual identity that stood out on the shelf as it made the leap from a regional to national presence. With names like Spring Fling, Boogie Down and Free Ride, each flavor took on a individual identity that acted as “an extension of our crew and the brewery.”

“When we created them and developed them, we got to know Solar and Free Ride like as if it was somebody in the brewery,” he said. “I think we matured out of that.”

While Lovett acknowledged that the previous design helped Revive stand out on the shelf, he also noted that consumer data provided insights like “maybe the packaging was limiting people from really understanding the product.”

“We wanted to bring someone in from the beer side because I didn’t want it to look like kind of whitewashed CPG; we wanted to keep the character of the brand,” Lovett said. “Greg and I went through a 3-4 month ‘brand therapy’ process to make sure that as we went to work on our design, we were clear on what we are, who we are, what we want to communicate in terms of the quality and healthiness of our product.”

In contrast to the previous label design, which featured a distinct logo and font for each SKU, the new look focuses in on a few core visual elements. The wrap-around paper labels have been dropped in favor of a clear plastic look that features a new logo in hand-drawn cursive lettering splashed across the front, with two different color stripes running horizontally directly below.

“We had all these sub-brands before and the brand kind of got pushed to the back,” Lovett said. “We really wanted Revive as a brand to shine through and the logo captured the energy, the fun and the legacy.”

Regarding the color scheme, he added: “A lot of the existing color that we were using really spoke to the ingredients and the brew. When you look at that, you can see and taste the ingredient.”

The flavor names, meanwhile, have been pushed to the lower body of the bottle, while text directly below the stripes emphasizes the actual ingredients and flavors in the liquid itself. Free Ride is now Hibiscus Refresher, Spring Fling has become Cucumber Lemon Mint, Up Beat is now Mocha Java Coffee, and so on.

“In real life, when you meet people, your first impression is what they look like, what they sound like, the energy they put off,” Lovett said. “Somewhere you might get their name but how you remember them is what they look like and how they speak. We realized that the names are more about when you come back to it the second, the fourth, the hundredth time — that’s when the name really matters.” 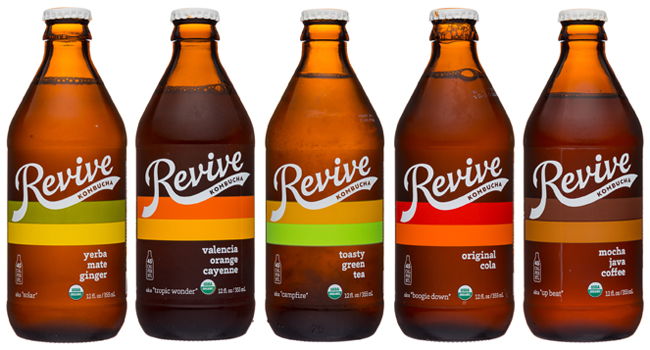 Despite the external changes, Lovett said that all formulations will remain the same, as will the 12 oz. custom mold glass bottle format. He also said that the company made an eleventh-hour decision to keep the phrases written underneath every bottle cap. Originally, the phrases were due to be swapped out for the new “Super Tasty Guaranteed” callout that vice president of marketing Josh Mohr said will be one of the brand’s strongest points of emphasis moving forward. That callout will appear on the reverse panel of the bottle, along with additional romance copy, according to Mohr.

Along with the new look, Revive is also debuting a new flavor: Turmeric Ginger Citrus, a.k.a. “Power Duo.”

The revamped line is rolling out now to retailers and will be accompanied by sampling activations and in-store promotions, Mohr said. The brand is currently available nationwide at Trader Joe’s, Whole Foods, Wegmans, and Fairway. Following a $7.5 million investment by Peet’s Coffee last year, the brand is now distributed in Northern California via Coldcraft, the coffee company’s cold-chain DSD network.

Reflecting on the old label design, Lovett said he was satisfied that it had served its purpose.

“It allowed the consumer that was ritual and coming back to it to create a deeper connection [with the product],” he said. “We stood out in the crowd, which is what we wanted to do.”