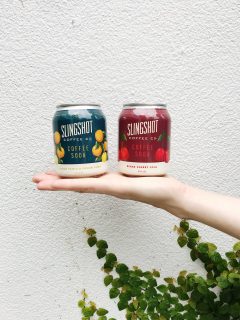 “Following in the tradition of Slingshot’s innovative approach to crafting the best-tasting cold brew products, our new Coffee Sodas reflect our modern twist on two classic soda flavors. And we’re thrilled to have our new Cold Brewery to help us add these incredible offerings to our lineup of award-winning Cold Brew products,” said Jenny Bonchak, Founder and CEO of Slingshot Coffee Co.

Slingshot’s new facility is located in a 13,000sf warehouse in Downtown Raleigh’s Anchorlight complex. In opening the space, Slingshot will continue to scale its production operation with the addition of state-of-the-art equipment and an R&D lab, as well as office space for their expanding team.

Slingshot’s light, bright and juicy profile is a distinct offering in the category, and their debut Coffee Soda flavors complement Slingshot’s award-winning Cold Brew. The flavor choices were inspired by Jenny & Jonathan’s favorite fountain sodas, and they are the first of Slingshot’s innovation pipeline to come out of the new facility.

“We have spent the past three years testing soda recipes using a palate- and coffee-driven approach to achieve balanced flavor with a sparkling, effervescent mouthfeel. The resulting product line is approachable, flavorful and fun. And we can’t wait for people to taste these,” said Jenny.

Both Slingshot Coffee Soda flavors are crafted using Certified Organic, Certified Kosher directly-traded coffee. Each flavor is sweetened with only real fruit juice and natural cane sugar, amounting to less than 1/3 the sugar contents of traditional sodas. Both flavors are shelf-stable and packaged in 8oz aluminum squat cans, retailing at an everyday SRP of $2.99.

Slingshot Coffee Sodas will make their way to store shelves in the Southeast in August, as well as debut on the West Coast through the company’s partnership with UNFI.

Launching in 2012 in Raleigh, N.C., by husband-wife team of national award-winning baristas, Slingshot Coffee Co. has been a pioneer in the Cold Brew category, crafting a premium line of single-origin, in-season Cold Brew coffees & Cascara Teas. Slingshot products are made from only sustainably-harvested, Certified Kosher and Certified Organic direct-trade coffee beans.