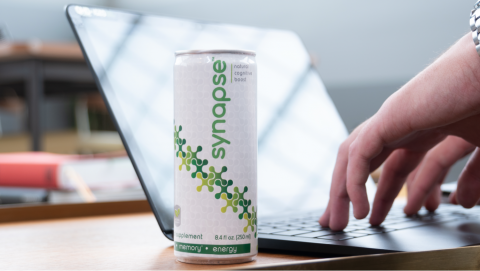 Synapse was founded by neuroscience scholar Daniel Porada, biomedical engineering student Charles Lankau and innovation and beverage industry leader Shouvik Ganguly. Daniel and Charles first met in 2014 during a summer medical internship at Wake Forest Innovations. That fall, they returned to their respective schools, Columbia University and Georgia Tech, where they noted the prevalence of excessive caffeine and energy drink consumption on campus.

“Putting our neuroscience and biomedical engineering knowledge to use, we sought to leverage the body’s Krebs cycle––the basic biological process in which cells generate energy––to create a supplement that would give a boost without the health consequences tied to some energy drinks and caffeine,” said Co-founder Daniel Porada. “We began experimenting with ingredient blends to enhance the brain’s natural function through increased mental focus and vibrancy.”

With the idea and formulation for the health-conscious energy alternative solidified, the co-founders were ready to take Synapse to market. They were accepted to Georgia Tech’s distinguished Create-X entrepreneurial initiative, which gives students the platform, knowledge and funding to launch start-ups. Through the program, they met Co-founder Shouvik Ganguly, who brings a long history in operations, marketing and commercialization from the global beverage industry. At The Coca-Cola Company for 18 years, he led brand management teams, ran category businesses and executed global launches.

The herbal supplement hones mental performance by harnessing the power of nootropics, substances that enhance cognitive function without negative side effects. Leveraging ancient natural ingredients with cutting-edge neuroscience, Synapse contains FDA-compliant ingredients that organically work together to increase levels of acetylcholine––the neurotransmitter in the brain responsible for maintaining attention and focus as well as forming new memories and learning new material.

“Though our product is brand new, the ingredients it contains have been well-researched and studied for their cognitive and physical effects,” said Co-founder Charles Lankau. “Synapse’s makeup incorporates natural compounds––never synthetic chemicals––found in melons, avocados, spinach and more to help the body generate more energy.”

Two of the most effective ingredients are water hyssop and huperzia serrata. The former is an aquatic herb that increases the rate at which your brain can produce new acetylcholine. The latter is a moss predominantly found in China that helps prevent your brain from breaking down the acetylcholine it has released. The blend also contains supporting ingredients to provide the brain with resources it needs for sustained function in the elevated state created by Synapse. To lessen anxiety, ingredients found in green tea and schisandra berries are also included.

Asian pear extract, organic agave syrup, carbonated water and natural flavors impart an asian-pear and ginger flavor in the slightly effervescent supplement. Unlike beverages including caffeine, Synapse does not cause jitters or a subsequent crash, but instead leaves a feeling of being fully in control with improved focus and mental clarity.

Available for purchase at select retailers, including Savi Provisions, Tap on Ponce, Mac’s Beer and Wine, Highland Bakery GaTech, Peach Vitamins and NewsLink at four major U.S. airports, and online at www.drinksynapse.com and Amazon, Synapse is sold individually in 8.4-ounce cans and in 12-packs. Monthly subscriptions are also available here.

For more information on Synapse, visit www.drinksynapse.com/how-it-works or follow along on social media with @drinksynapse and #drinksynapse.