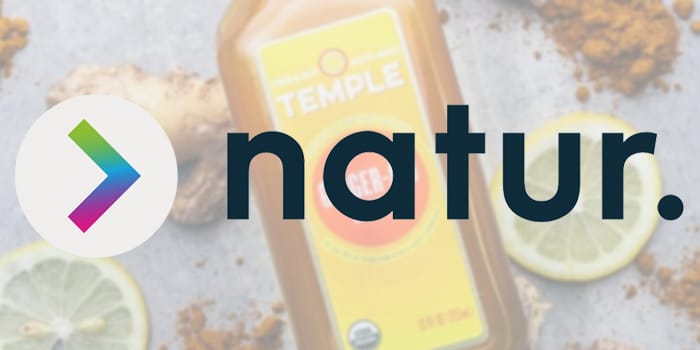 Turmeric-based beverage brand Temple today announced that Natur International Corp., a producer of plant-based food and beverages based in the Netherlands, has acquired a controlling interest in the company. Financial terms of the transaction were not disclosed.

According to a press release, Natur has “plans to capitalize on the synergies of Temple’s strong presence in New York and Los Angeles” in addition to other regions. Along with snacks, the company specializes in high-pressure processed fruit and vegetable juices, including CBD-infused products.

“This is an excellent opportunity to participate in the vibrant U.S. health and wellness beverage space by anticipating the opportunity to expand our portfolio with these fine products in the E.U. and Chinese markets,” said Paul Bartley, CEO of Share Natur, in a press release. “Our company welcomes the Temple team and the launch of select European and U.S. products as a complement to our portfolio.”

The deal comes slightly over a year after Temple was purchased by Dunn’s River Brands, a New York-based portfolio company formed in partnership with private equity firm Fireman Capital Partners, in April 2018. The company also owns iced tea brands Tradewinds and Sweet Leaf Tea, both of which were purchased from Nestle Waters North America in 2017.

Founded in 2009 by Daniel Sullivan, Temple (formerly Temple Turmeric) has continuously evolved over the years: initially launched with a line of turmeric-infused ades, the brand has since marketed a variety of turmeric-enhanced beverages including elixirs, apple cider vinegar drinks, shots and even coffees. Following its acquisition by Dunn’s River Brands, which saw Ian Knowles succeed Sullivan as CEO, the brand showcased new packaging, labels and products aimed at shifting the brand’s identity from turmeric to the broader natural functional space. This included the launch of Temple’s first shelf-stable product — a line of carbonated “vitality supertonics” in 12 oz. slim cans.

According to Temple president Adam Litvack, who assumed the role in June following the “unexpected” departure of his predecessor, Knowles, the deal came together quickly. Tasked by Dunn’s River Brands with “finding a partner that made sense” for Temple, Litvack reached out to Natur CEO Rob Paladino, a former chief executive at WTRMLN WTR and Pure Brazilian, and the transaction was completed in about 50 days.

According to Litvack, the deal will not affect Temple’s current staff and operations.

“What it means (for Temple) is that Natur is going to continue to fund our growth and that they see a huge future for us,” he said. “Temple has been growing really nicely in the natural and conventional world and they will continue to support that and help us grow better.”

Bill Meissner, president of Dunn’s River Brands, said the decision to sell its controlling stake in Temple was based primarily on how the brand fit into its strategy, which mainly centers on shelf-stable products. Despite strong turns and new account placements from Temple’s line of 2 oz. refrigerated shots, he noted that chilled distribution “was not something that is in our core strength,” while the introduction of the shelf-stable energy line also brought challenges of its own.

“I know what capital intensity there is behind growing energy drinks, even a natural energy play,” he said. “For the business to be capital efficient, we believe it really needed to focus on its strengths, and we found that to be the reason to not lean in really hard with the vitality supertonics.”

While Temple shifts to Natur’s portfolio, Meissner said the move will free Dunn’s River to pursue other opportunities in the beverage market, including potential entries into cold coffee and non-alcoholic mocktails.

“We learned (from the experience with Temple) that we would want to do something a little bigger, and something in ambient distribution with a trajectory that matches what we are doing with Sweet Leaf,” he said. “The idea of a longer run niche item is probably not our bullseye.”