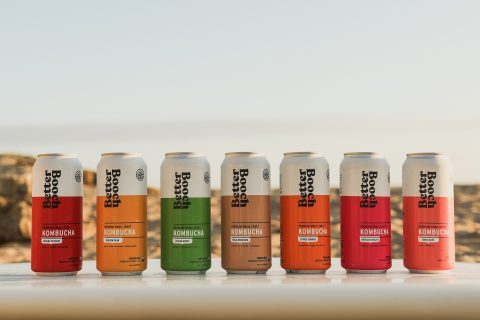 Known for deliciously imaginative flavors, the brand quickly built a cult following in Southern California and grew from a one-gallon jar operation to brewing over 10,000 gallons weekly. Better Booch offers consumers a fizzy, refreshing kombucha that is powered by premium loose leaf teas, adaptogens, herbs and botanicals, and low in sugar while remaining truly raw, unpasteurized, and non-alcoholic. With this national expansion, Better Booch will further its efforts to bring wellness to a broader audience through beverages that are functional, approachable and delicious. Better Booch has partnered with tech-savvy distributor Iris Nova in the Northeast, as their exclusive kombucha and powerhouse Dynamo Distributing in Texas, along with new DC’s at UNFI & KeHE, to open strong in the new regions.

“I saw the potential for Better Booch to become the #1 selling canned kombucha in the US, and now our national rollout is well underway! We are excited to be partnering with some new, best-in-class distributors in the East and South. We are honored to expand with Whole Foods in new regions, as well as Central Market, Nugget Markets, New Leaf, and many others. More than ever, people are looking for healthier, better for you options to replace CSD’s and high sugar beverages. We are now able to meet the consumers where they shop, while offering functional and immunity boosting benefits.” Shulman says. “We are just getting started, with so much more to come!”

Better Booch’s expansion earned them a coveted spot on the Inc. 5000 list of fastest growing private companies in the US. The brand, based out of Los Angeles, California, saw over 320% growth of their canned product in the last 12 months.

“Better Booch is on a mission to make the healthiest choice the obvious choice. We believe wellness and good health should be accessible, and that labels should be accurate and easy to understand,” says Ashleigh Lockerbie, Co-founder.

Better Booch was founded by creatives seeking a more balanced, healthy lifestyle. The kombucha, brewed and canned in-house, uses no juice, powders, chemicals, nor concentrates in its 100 percent tea-based blends. The lowest in sugar on the market (only 5g per serving), it is brimming with probiotics and beneficial acids produced from fermentation while polyphenols and antioxidants from the tea support overall health and immunity. Better Booch’s current offering includes 8 delicious flavors, each created with taste and function in mind. 100% tea-based Better Booch is made the traditional way with each batch brewed individually and expertly by master brewers with no shortcuts on quality or flavor. Better Booch (can $2.99 SRP, and 5 gallon kegs) is vegan, kosher, raw, gluten free, non-GMO, and organic and can be found at over 2,000 retail locations and on Amazon for $47.99 for a 12-pack case. Find Better Booch at www.betterbooch.com or get social @betterbooch on Instagram.