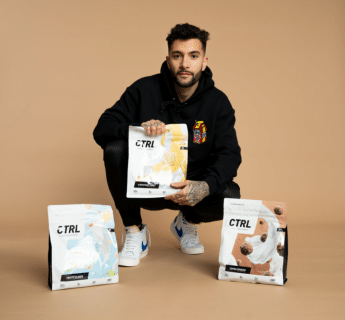 NEW YORK— CTRL, the meal replacement startup, has announced that the world’s most prominent and influential gaming organization FaZe Clan has taken an ownership stake in CTRL. The deal marks the first time that FaZe Clan, celebrating its 10th anniversary this year, is taking a co-owner position with another brand.

“This deal represents the next step in the evolution of esports,” said Sundance DiGiovanni, co-founder of CTRL and Major League Gaming. “A few years ago, nobody believed that esports was ready for prime time. Now, it’s a major force in both culture and business.”

As part of its ownership, FaZe Clan will put its marketing prowess, including 230 million followers and legions of devoted fans, behind CTRL to grow the brand globally. In the future, CTRL will collaborate with FaZe Clan on new flavors for its meal replacement shakes.

“FaZe Clan has long championed the importance of health and fitness for gamers,” said Lee Trink, CEO of FaZe Clan. “By taking a stake in CTRL, we can bring much-needed attention to the importance of better nutrition and provide a healthy option built especially for gamers by people who understand this community best.”

“FaZe Clan is the ultimate embodiment of esports as a lifestyle brand, which has come to include everything from music to art to clothing,” said Skyler Johnson, co-founder of CTRL. “So far, nutrition for gamers hasn’t really been part of the conversation. CTRL fills that niche and brings this topic to the forefront.”

“People generally think of gamers as kids in their mom’s basement drinking soda and eating potato chips,” says FaZe Clan founder FaZe Temperrr. “The truth is we actually take care of ourselves and want to continue breaking the traditional stereotype of what it means to be a gamer. With CTRL, we’re introducing a healthy option to the gaming community and letting our fans know that nutrition is extremely important to us.”

CTRL, which stands for Catered to Real Life, makes a line of nutritional and convenient meal replacement shakes to help gamers, athletes, and anyone else eat healthy and perform at their best while offering that “bottom of the cereal bowl” nostalgia.

Since its inception in 2010, FaZe Clan has established itself as the world’s most prominent and influential gaming organization known for its disruptive original content and hyper-engaged global fanbase of 230 million combined across all social platforms. FaZe Clan holds an unrivaled position at the epicenter of gaming, sports, culture and entertainment, driving how the next generation consumes content, plays and shops. Their roster of 85 influential personalities consists of world-class gamers, engaging content creators and a mix of talent beyond the world of gaming, including NBA star Ben Simmons, NFL star Juju Smith-Schuster and global superstar artists Offset and Lil Yachty. The organization’s unmatched esports division includes seven competitive teams in Fortnite, FIFA, PUBG, PUBG Mobile, Rainbow Six, Call of Duty League (Atlanta FaZe) and CS:GO with dozens of world championship trophies among them. In addition, FaZe Clan has become a sought-after fashion and lifestyle brand through an inspired apparel line and limited-edition collaborations with partners including Champion, Manchester City FC, Lyrical Lemonade, Kappa, CLOT, LA Kings and more. Follow us @FaZeClan and @FaZeApparel.