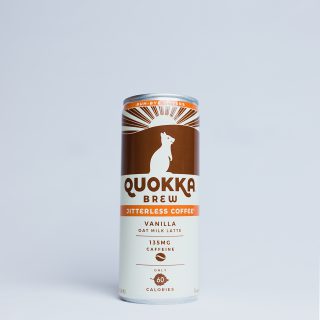 BERKELEY, Calif. — The Jitterless revolution is here. Quokka Brew is officially announcing the launch of the first-ever ready-to-drink caffeinated Jitterless coffee on December 15, 2020. Packaged in a recyclable 8 oz. aluminum can, this oat milk latte is one of the healthiest ready-to-drink coffees to hit the market. Boasting a light 60 calories per can, 135 mg of caffeine, and only 4 grams of all-natural cane sugar, “tasty” just became healthier.

Many people needlessly suffer through the negative consequences of caffeine including the caffeine jitters and midday crash, simply to experience that kick of increased energy we all crave. According to Quokka Brew’s cofounder George Passantino, “we questioned these tradeoffs and worked to eliminate coffee’s negative side effects, completely reimagining what a cup of coffee can be.”

Formulated with a proprietary blend of organic amino acids and brain-boosting nootropics, the company’s patent-pending blend is scientifically proven to eliminate the jitters and caffeine crash — all without sacrificing a single ounce of energy. Each oat milk latte uses Fair Trade Coffee and has the caffeine equivalent of 1.5x a normal cup of coffee (135 mg) all while being vegan and organic.

After an extremely successful crowdfunding campaign in August raising over $75,000 in only one month, Quokka Brew became one of the highest crowdfunded beverages of all time and is now ready for its next big step.

“The launch of our Jitterless oat milk latte marks the next stage of Quokka Brew’s journey, as our new sustainable packaging lends to longer shelf life allowing us to expand further than ever before reaching locations once inaccessible,” said co-founder Ofek Arush.

Quokka Brew takes its name from the quokka, which is a small marsupial native to Australia that is deemed the happiest animal on Earth. Beginning December 15th, the entire team at Quokka Brew aspires to spread that happiness to every customer through each delicious Jitterless oat milk latte. This is coffee reimagined.

While studying during finals week after many cups of coffee, UC Berkeley students George and Ofek searched for a solution to the jitters and afternoon crashes they frequently experienced only to find that there were none. Savvy business partners since middle school, these childhood best friends set forth to innovate a healthy Jitterless coffee. Working alongside chemists and food scientists, they spent their Junior year of college creating the formula, officially starting the Jitterless revolution. Quokka Brew’s mission is to energize people without the negative side effects of caffeine, enabling everyone to become their happiest, best selves — just like the quokka, the happiest animal in the world.