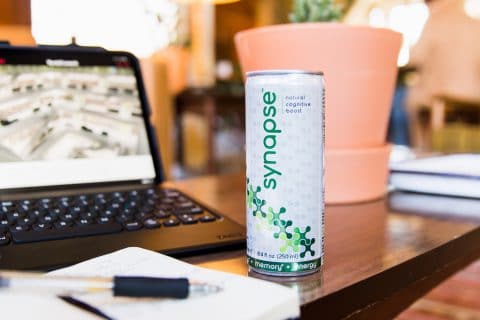 ATLANTA— Synapse, maker of the world’s first ready-to-drink, natural nootropic supplement for energy and focus, has been selected to participate in PepsiCo’s 2020 North America Greenhouse Accelerator program. The announcement comes just days before Synapse’s debut appearance at Natural Products Expo West, the leading trade show in the natural, organic and healthy products industry, and caps a year of exponential growth for the company.

Following two years of extensive research, development and testing, Synapse hit shelves at mom-and-pop healthy food retailers in the Atlanta area in February, 2019. Since launch, the company has secured partnerships with leading natural channel distributors UNFI and KeHE, signed a distribution deal with Pepsi of Greenville and joined forces with Carolina Canners, a well-respected regional bottling conglomerate. Since kicking off with these distribution partners, Synapse is available in over 300 doors regionally and is gearing up for their first major national retail launches in May, 2020.

Direct-to-consumer sales of Synapse in the twelve-month period since launch have quadrupled quarter over quarter, with strong repeat purchase behavior and overwhelmingly positive consumer feedback on both taste and functionality. This growth trajectory and early consumer response closely mirrors analyst predictions of rapidly increasing demand for the group of cognition-enhancing ingredients known as nootropics. ($6 billion by 2024, Zion Research.)

“After a successful test of Synapse in Greenville, South Carolina, in 2019, we are expanding the footprint in 2020 to reach the millennial and Gen Z consumers in our markets who value healthful alternatives to energy drinks,” said Bill Fitzgerald, senior vice president of sales, Pepsi of Greenville, an independent bottler of PepsiCo.

Synapse joins nine other purpose-driven startups in the 2020 PepsiCo North America Greenhouse program, which is designed to support emerging entrepreneurs and brands in the food and beverage industry. Each of the participating startups will receive $20,000 in grant funding and participate in a six-month business program designed to accelerate their growth through personalized mentorship.

Synapse invites NPE attendees to “Unlock a New Dimension of You” by experiencing its product first-hand at Booth H1012 at Natural Products Expo West, March 3-7 in Anaheim, Calif.

The first seeds of what would become Synapse were planted in fall, 2015, when Daniel Porada, a neuroscience and behavior major at Columbia University, met Charles Lankau, a biomedical engineering major at Georgia Tech. Over the course of their studies in the years that followed, they began to wonder, “What would happen if we created an energy product that didn’t just use caffeine to keep you awake and sugar to give you a jolt? What if we actually created something that helps your body’s own energy systems perform more efficiently?”

Surrounded by students who were drowning in energy drinks and using prescription drugs off-label, the two were fascinated by the world of cognitive enhancement using ancient plant-based nootropics and set about to create a supplement with an impeccable, natural ingredient label, crafted with the highest of standards and providing a no-compromises option.

In 2016, they joined forces with Shouvik Ganguly, a seasoned professional of the beverage industry with 18 years at Coca-Cola under his belt, and work on Synapse began in earnest.

Today, Synapse, the world’s first ready-to-drink, natural nootropic supplement for energy and focus, is available at more than 300 retailers and direct to consumers at www.drinksynapse.com