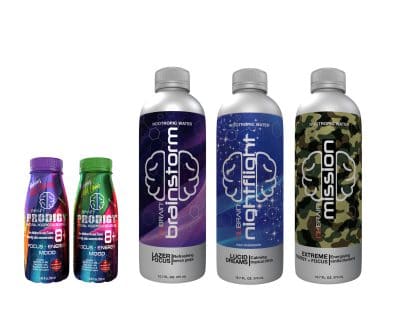 With functional ingredients continuing to lead trends in the natural products industry and many health-conscious consumers rethinking their relationship with caffeine, Tesla Nootropics NEW flagship product Nubrain Brainstorm provides a healthy, caffeine-free alternative to energy drinks and is crafted with substances known for their ability to promote energy, focus and mental stamina with no artificial ingredients, jitters or crash.

Its blend of natural and herbal ingredients combines ancient wisdom with modern science in a convenient, ready-to-drink form, using the category of cognitive-enhancing ingredients known as “nootropics,” which are expected to grow to $6B by 2024. (Zion Research)

Following three years of extensive research, the Nubrain Nootropic Water range is now available online and is geared up for major national retail launches in 2020.

“Our motto is ‘value through innovation’. This concept and formula was devised in 2014, way before anyone else, so our claim that we are ‘the first real nootropic beverage’ stands absolutely true” said Angela Kahn, co-founder, Tesla Nootropics. “We feel that the energy drink market has had it’s turn and it is now time for the next generation of drinks. Drinks that help the brain and support people achieve more everyday.”

Tesla Nootropics was founded in 2016, when Angela Kahn, a ‘big oil’ exec realized the need for a product not only replacing coffee but also supporting mental energy, clearing mental fog, enhancing memory, motivation and brain health. A good-tasting drinkable product, not a pill, that could be found on the shelf or in a cooler. A drink made out of natural ingredients and without sugar. After rigorous R&D spanning from labs in Berlin, LA and London, Nubrain Brainstorm was developed. Following Nubrain Brainstorm is Nubrain Nightflight, the first nootropic drink for lucid dreaming and quality sleep, Nubrain Mission with a ‘battle ready’ fortified formula and Nubrain Prodigy, the world’s first nootropic drink for children. Tesla Nootropics also produces a range of other functional products, CBD products, and a range of premium nootropic supplements.

The objective is to make the Nubrain Nootropic Drinks, the world’s first ready-to-drink, the go- to natural nootropic beverage for energy and focus. Facebook: @teslanootropics.