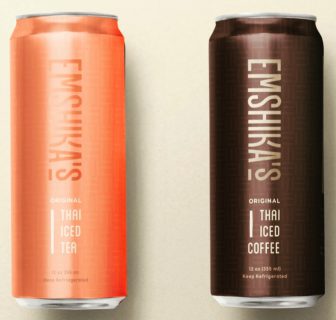 NEW YORK — Thai Iced Tea – often regarded as the essential accompaniment to a bowl of Pad Thai or Thai Curry – is going mainstream with Emshika’s Original Thai Iced Tea and Thai Iced Coffee. The products will be brought to market this month by Thai-born Chef and Entrepreneur Emshika Alberini, and will be available both online and at select retailers in the Northeast.

Growing up in a family with a strong connection to Thai Iced Tea, Emshika wanted to break the beverage out of the confines of Thai restaurants and share her family’s recipes with the masses. As a busy mom and businesswoman that is often on-the-go, canning the recipe meant it could be accessed by all, even during a global pandemic.

Thai Iced Tea has a somewhat cloudy history – the orange-hued beverage that most Americans are familiar with actually started here in the United States, not in Thailand. Thai Tea (also known as Thai Iced Tea) or “cha-yen” (“cold tea”) in Thailand, is a drink made from strongly-brewed Assam tea. Tea was not widely available in Thailand until the 1980’s, when it started arriving in bulk from China and soon became a cash crop. It is believed that Field Marshal Plaek Phibunsongkhram – a former Thai leader and prime minister with an affinity for Western culture – was the inventor of the Thai iced tea, as he started the trend of enjoying it over ice and with milk. The beverage became popular in street food culture; however, few other flavorings were added to the initial version beyond star anise and orange blossom water (but more often than not, Thai iced tea is served without any additional flavorings).

As Thai food made its way to North America, the tea became popular in the United States, and chefs at Thai restaurants started using food coloring and additional flavorings to appeal to Western preferences. In Thailand, traditional Thai Iced Tea is served in the following variations: Dark Thai iced tea (Cha-Dam-Yen), which is Thai tea served chilled with no milk and sweetened with sugar only; and Lime Thai iced tea (Cha-Ma-Now), which is similar to Dark Thai iced tea, but flavored with lime and sweetened with sugar and sometimes mint. Thai tea is also served hot, mostly in the morning, either on it’s own, or sweetened with sugar, called a Dark Thai hot tea (Cha-Dam-Ron). It should be noted, though, that many restaurants in Thailand now also serve the version that most Americans are familiar with in an effort to appeal to tourists. Assam tea – which is loaded with high minerals and antioxidants – aids in digestion, strengthening the immune system, and is heart-healthy.

Emshika’s Thai Iced Tea can be sipped on its own, or used as an ingredient for cocktails and/or in recipes. For instance, add some vanilla vodka for a Thai Iced Tea-Tini, or use it to make Thai Iced Tea French Toast!

Emshika Alberini, who owns and operates Chang Thai restaurant in Littleton, New Hampshire, grew up in a family with deep roots in Thai iced tea. Born and raised in Bangkok, Thailand, she was raised in a unique household: her father, Chalerm, served as a guardsman for the late King Bhumibol Adulyadej for 30 years and traveled the world by his sid; her mother, Phitsanee, ran a Khao Yum (Thai rice salad) and mango sticky rice food cart a block from their home (the cart also sold Thai iced tea).  Phitsanee ran the cart daily, until the time that she had to pick Emshika and her sister, Sriwipa, up from school – a true labor of love.  In the summers, Phitsanee would bring the kids to visit their grandmother (“Yai”) in Nakorn Sri Thammarat, located in the south of Thailand. There, the grandmother ran a grocery store that was attached to her house, along with a mini patio where she sold homemade food like Khanom Jeen Nam Ya (rice noodles with fish curry sauce) and Kanom Jeen Nam Prik (rice noodles with spicy shrimp and coconut) to the local fishermen, farmers, and teachers. Yai woke up at 3AM every day to make everything from scratch. In the afternoons, Emshika’s late aunt (Yai’s youngest daughter) sold drinks and desserts on the patio, including two varieties of Thai iced tea: Cha-Dam-Yen and Cha-Manao. Emshika credits the hard-working women in her life (“boss ladies,” as she puts it) as her inspiration, and says they’ve helped shape her into the woman she is today.

In the 2000’s, Emshika earned her bachelor’s degree in Bangkok and emigrated to the United States by way of a nanny exchange program. She would later make it to Albany, New York, where she’d earn a second degree in Organizational Management, marry, have two children, and then relocate to Littleton, New Hampshire (her then-husband’s place of birth).  While in Littleton, Emshika took the bold entrepreneurial step to open her own restaurant – a dream that she and her late sister had once planned to do together. Chang Thai Cafe opened in 2008, and has been recognized as a New Hampshire Magazine’s Women-led Business to Watch. In 2018, Emshika was also recognized as a Cherry Bombe 100, and as New Hampshire Magazine’s “Intriguing Woman Business Leader.” Emshika is delighted to bring her Thai iced tea to market, saying, “I’m delighted to share this family treasure with consumers.  I spent my entire childhood enjoying this beverage and am honored to put a modern twist on this very classic Thai libation.”