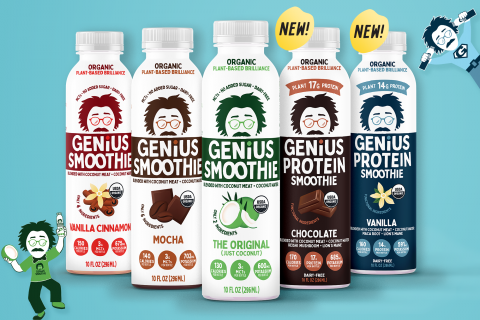 Their latest string of launches includes Costco Hawaii, Costco Texas, and soon will be launching in Costco Northeast, Mid-Atlantic, and North Atlantic (select stores in each region).

Genius Juice is also making a play into the conventional channel with Albertson’s, launching in 2 new regions: Seattle and Southwest with all 3 core smoothie SKUs (Original, Mocha, and Vanilla Cinnamon).  This brings their total store count nearing 5,000 stores total.

To boot with their national expansion, Genius Juice also re-branded and upgraded their identity to appeal to a wider audience. “We felt that being branded solely as a whole coconut smoothie didn’t do justice to the premium-ness and uniqueness of our product.  By now targeting a larger consumer demographic beyond just coconut lovers, we can now get consumers that are looking for a healthier, lower sugar, cleaner, plant-based functional smoothie.  We don’t add any ‘dumb stuff’ such as gums/emulsifiers, natural flavors, added cane sugar, or stevia,” Bayer says.

“The biggest objective we had with the re-branding is to capture a larger audience of consumers who love plant-based healthy, clean options, and also to show how premium our product it.  Our older packaging looked cartoony and didn’t reflect the high-quality nature of our product, and I feel this re-brand does enormous justice to what’s inside the bottle.”

“We also stack up very well against any plant-based juice/smoothie beverages out there with clean ingredients, no junk added, while tasting creamy and decadent at the same time,” Bayer said.

There will be more launches to come in mid-late 2021 to continue Genius Juice’s expansion in the plant-based functional set.