The New Beverage Showdown, which takes place as part of the two-day BevNET Live conference, will be held on Dec. 3 and 4 at the Loews Beach Hotel in Santa Monica, Calif. 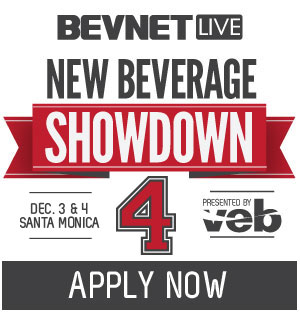 As part of the expanded format, the New Beverage Showdown will feature a Semifinal Round on the morning of Dec. 3. This “Breakfast Session” will be held before the official start of BevNET Live programming. In addition to those companies competing in the new beverage showdown, all attendees will be able to watch the presentations.

The Semifinal Round will allow a field of 20 or more beverage entrepreneurs attending BevNET Live to show off their business plans and new products and receive immediate feedback from a judging panel. That panel will then choose the six companies that will move on to compete in the Final Round, to be held on Dec. 4.

“We’ve had so much interest from entrepreneurs that we felt the need to give as many as possible a chance to show their products and plans to the judges,” said John Craven, the founder and CEO of BevNET. “By opening up the process, we will really get a chance to see who is capable of representing their product well enough to move on to the finals.”

Companies signing up to attend BevNET Live and wishing to present as part of the New Beverage Showdown will be added to the semifinals on a first-come, first-served basis: all attending companies that meet entry qualifications will be able to compete.

The semifinal will begin at 7:45 a.m. on Dec. 3, and will be accompanied by coffee and light breakfast. BevNET Live will begin at 10 a.m., immediately following the conclusion of the semifinal.

This year, six brands will be named “Finalists” and will get the chance to present to the judging panel and full BevNET Live audience on Tuesday, Dec. 4, 2012.  The Semifinal Round will be held immediately prior to the beginning of BevNET Live on the morning of Monday, Dec. 3. The Semifinal Round is intended to help innovators refine their ability to quickly introduce their products to important potential investors, distributors, and other key connections.  More details on the format, including the exact timing of the presentations, will be provided at a later date.