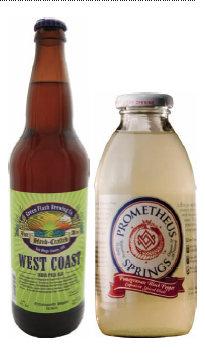 A recent report on food and beverage trends found that as Americans have grown more sophisticated in their eating habits, culinary innovators have sought to utilize increasingly intense flavors to satisfy consumer palates.

Titled “Extreme and Edgy Flavors,” the report was published by Packaged Facts and the Center for Culinary Development and lists several emerging food ingredients – including chili pepper, wasabi and bittering agents – that have been at the forefront of both cutting edge restaurant menus and uniquely crafted packaged goods.

With regard to beverages, a number of innovative companies have infused distinctive ingredients into drinks with more common and traditional flavorings. One such company is Taylor’s Tonics, which has found success via the infusion of chai and mate into their colas and low calorie sodas.

Others have evolved the entire premise of their business around a particular food or extract. Prometheus Springs sells a line of beverages which uses as its primary flavor, capsaicin, an extract derived from chili peppers.  The company paired the ingredient with other intense flavorings to develop their Lemon Ginger and Lychee Wasabi drinks.

However, the desire to challenge consumer palates is most clearly seen in the craft beer industry. Breweries have continuously pushed the envelope with the use of bold and bitter hops into various styles of beer. Take for example, Green Flash Brewing Company’s “West Coast IPA”, a beer that, according to the International Bitterness Units scale (which has a technical limit of 100), measures at an eye-popping 95 IBUs, where in comparison, the average beer on the market comes in at around 29 IBUs.

(Editor’s Note: This article also appears in May 30, 2011 issue of Beverage Spectrum Magazine.  View the rest of the issue.)