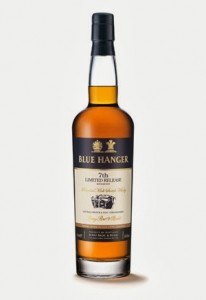 SAN FRANCISCO, CA, September 30, 2013 – Arriving in America for the first time, Anchor Distilling introduces Blue Hanger 7th Limited Release, a United States exclusive from Berry Bros. & Rudd Spirits.  Limited to only 3,088 bottles, this new variant of Blue Hanger is comprised of the following whiskies; one hogshead of Bruichladdich 1992, one butt of Bunnahabhain 1990, four hogsheads of Miltonduff 1997, and two hogsheads of Bunnahabhain Moine (peated) 2006.

This blended malt whisky is named after William “Blue” Hanger, the Third Lord Coleraine, a loyal customer of Berry Bros. at the end of the 18th century. Considered one of the best-dressed men of his day, his nickname came from his preferred clothing color. Blue Hanger was originally a blended Scotch whisky intended for the diplomatic export market in 1934, but disappeared for a period of time until 2003 when Doug McIvor, spirits manager, began his experiments in vatting malts. His objective from the beginning has been to create the best blended malt possible from existing stock.

The initial release in the U.K. of Blue Hanger in November 2003 ran to a mere 700 bottles and was a vatting of only two single malts: Glen Grant and Glenlivet. The first commercially available blended malt assembled by McIvor, Blue Hanger immediately secured a devoted following, which has led to each subsequent release being eagerly anticipated by whisky enthusiasts around the world.

“This exceptional and very limited blended malt turned out as impeccably as its namesake William ‘Blue’ Hanger,” says Doug McIvor. “Bewitching aromas of orange peel, melon skin, vanilla and peat-smoke tangle with hints of sandalwood, leather and moist pipe tobacco augmenting the experience. The smokiness is firm but not dominant, allowing the fruit notes to frolic. The palate is luscious and complex, building with sweet fruity intensity and finishing with lingering peat-smoke and a spicy edge.”

As with every expression of Blue Hanger, the strength is 45.6%, in recognition of the original Berry Bros. blend, which was bottled at 20 below proof. Blue Hanger 7 is only available in the United States at SRP $99.99.

Over 310 years ago, Berry Bros. & Rudd opened its shop at 3 St James’s Street, opposite St James’s Palace. Since its inception, Berry Bros. & Rudd has been a pioneering wine and spirits merchant. Today Berry Bros. & Rudd Spirits Ltd enjoys a super-premium portfolio including No. 3 London Dry Gin (winner of the Gin Trophy at the International Spirits Challenge 2012 & 2013), The Glenrothes Single Malt Whisky and The King’s Ginger Liqueur.

Anchor Distilling Company aims to provide the bridge between discerning buyers and world’s finest spirits. A privately owned distiller and importer, Anchor boasts an artisanal portfolio with over 300 specialty products from nearly 20 countries.  Our products are from multigenerational family-owned companies, and are sought by connoisseurs for their superior handcrafted artisanal qualities.  From a distilling perspective, Anchor Distilling is dedicated to creating very small batches of traditionally distilled spirits. www.AnchorDistilling.com

Crown to Open New Aluminum Can Production Facility in Nevada

These Are the RTD Cocktails We’re Sipping in September