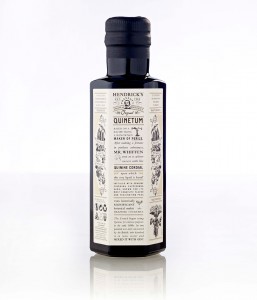 New York, NY (September 26, 2013) –  After several years tinkering in the laboratory, HENDRICK’S Gin Master Distiller, Lesley Gracie has perfected a new quinine cordial for bartenders to create dazzling cocktails for their patrons.  With a first batch of just over 4,000 bottles, the cordial will only be available to two dozen carefully selected bars across the U.S. and is not available for retail.

Combining lavender and orange distillates with extracts of orange blossom, wormwood and holy thistle, Quinetum’s core ingredient of cinchona succirubra bark is balanced for a more rounded and workable liquid.  The recipe, created by Lesley, is inspired by the work of Thomas Whiffen, a pioneering mathematician and chemist who did much to develop the use of quinine in the 19th century.  Crafted in Girvan, Scotland, home of HENDRICK’S Gin, Quinetum has a base of glycerol and a small amount of sugar syrup and citric acid.  The product is 4% ABV.

Commenting on her latest creation, Lesley Gracie, HENDRICK’S Gin Master Distiller, said: “One of the joys of working for a family-owned company is the amount of freedom to work away on interesting little projects without huge pressure.  Quinetum has been four years in the making, but it is only by speaking to the bartenders who come and visit us at the distillery and trying many different recipes of extracts and distillates that we learn what works.  The unusual flavors of our gin appeal to a curiously pernickety drinker and so it is only right we take time before putting the HENDRICK’S name to anything else.”

“What most bartenders will immediately pick up on is the orange nose, giving way to subtle lavender notes.  The taste has a deep green, bitter flavor from the wormwood, holy thistle and, of course, quinine.  Bartenders should find this combination amiable for crafting into cocktails with HENDRICK’S characteristic floral notes and spicy bitterness, which comes from the caraway seed and cubeb berries,” added Lesley.

While HENDRICK’S U.S. Ambassadors have doled out these coveted bottles to top bars in New York, Chicago, Austin and San Francisco to encourage discovery of their own Quinetum concoctions, they have also highlighted the cordial in an evolved Collins.

Method: Build all in hi ball over cubed ice.

Quinetum is designed to blend perfectly with HENDRICK’S as a cocktail ingredient, although it is also ideal for making a HENDRICK’S & Tonic. With only a limited batch available worldwide, Quinetum will not be found in any shop or wholesalers’ list for purchase. It will be given to select bartenders to experiment with and concoct the most daring and delicious HENDRICK’S cocktails.

The new cordial is presented in a vessel modeled on a 1940’s poison bottle discovered in an old London bric-a-brac shop. The word ‘quinine’ originally derived from the Quechua (Inca) word for the cinchona tree bark where quinine occurs naturally. The tree was named after a Countess of Chinchón, the wife of a viceroy of Peru, who, in 1638, was introduced by native Quechua healers to the medicinal properties of cinchona bark. More than 200 years later, Thomas Whiffen did much to develop the use of quinine and its related products at the chemical factory where he worked. He was responsible for coining the name ‘Quinetum’ for the ‘Pure Alkaloids of East India Red Bark’ at his factory, which was known as ‘Quinine Works Battersea’.

This new product follows on from trials of Battersea Quinine Cordial in 2009.  However, the recipe of Quinetum is markedly different from Battersea.