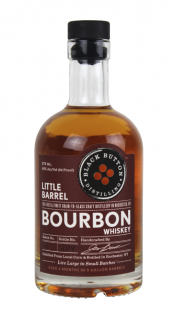 First Locally Made Bourbon Released in Monroe County Since Prohibition

ROCHESTER, NY (NOVEMBER 11, 2014) – Black Button Distilling, Rochester NY’s first and finest grain to glass craft distillery, announces a one-time limited release of their Little Barrel Bourbon on Black Friday, November 28th, 2014. The release marks the first time bourbon has been made and sold in Monroe County since Prohibition, and only 1,400 bottles are available.

Little Barrel Bourbon was aged for four months in five gallon barrels. It is the same recipe going into the barrel as the big barrel Bourbon that will be released next year, giving craft bourbon fans an opportunity to taste what’s coming at Black Button Distilling.

“The time in-barrel and size of barrel have a dramatic effect on the flavor of the bourbon. It’s a much younger, corn flavor, than a traditional bourbon, but it’s very smooth for its age,” said Jason Barrett , Black Button Distilling President/Head Distiller.

The one-time limited release of 1,400 375 ml bottles will sell for $39.99 per bottle, with a limit of one case purchase per person. Little Barrel Bourbon will be available in the Black Button Distilling Rochester, NY tasting room over Black Friday weekend and will be available in all the finest local liquor stores beginning December 1st.