Corsair Distillery has had a breakthrough year, winning two “Distillery of the Year” awards, one for the American Distilling Institute in Seattle, WA and one for the Wizards of Whisky awards in the U.K.

One of the keys to their success has been the quality of their people, and with that in mind, Corsair has a big announcement. Owners Darek Bell, Andrew Webber, and Amy Lee Bell are proud to announce that Corsair has named Andrea Clodfelter as Head Distiller and Distillery Manager of their Nashville operations. “I love being part of the Corsair culture, which is one that promotes the creative and weird in its employees and policies. And often this translates into really great whiskey,” said Clodfelter. 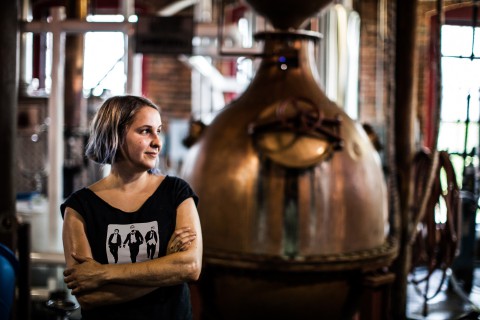 Owner Darek Bell said, “Andrea has been key to some of our best products, like our Quinoa Whiskey,” which won Corsair their second “Innovator of the Year” award for Whisky Magazine. “Andrea’s passion, dedication, and enthusiasm are awesome. We work in a really fun industry. Every day someone tells us we have their dream job.”

So how did Andrea get her dream job? Andrea had been home brewing beer for years. She read about Corsair in Southern Living magazine and decided she wanted to become a distiller. She saw a job opening for bartender and then worked her way up to Brewing Assistant, Junior Distiller, Distiller, and now takes the reigns as Head Distiller. Clodfelter was trained at the Siebel Brewing Institute.

Corsair President Andrew Webber said, “Andrea has been our secret weapon. She is incredibly talented and hardworking.” Andrea has worked in every aspect of the distillery, from bartending, leading tours, brewing, distilling, blending, and bottling.

Fearless females creating some of the best craft spirits

Despite the masculine look of their products, the women behind the scenes have been crucial to Corsair’s success. Corsair not only has a female head distiller in Clodfelter, but even rarer, a female owner: Amy Lee Bell. Another key for Corsair’s charm on the hospitality side is Bar Manager Emily Kendall.

Corsair has won three “Craft Distillery of the Year awards” for the American Distilling Institute, Whisky Magazine, and the Wizards of Whisky competition.The distillery has won a number of other notable awards, including two “Innovator of the Year” awards from Whisky Magazine’s Icons of Whisky awards.Corsair’s triple smoke whiskey won “Artisan Whiskey of the Year” for Whisky Advocate Magazine.