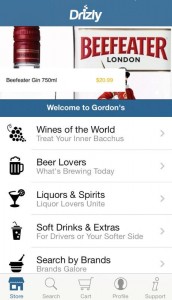 BOSTON, Jan. 22, 2014 /PRNewswire/ — Today, millions of people in New York City and Boston can have beer, wine and liquor delivered to their doorstep, thanks to Drizly, the new iPhone app from Drizly, Inc. The app will reach many more consumers and U.S. cities in the next six months as the company announces today a round of $2.25 million in seed funding to fuel its growth.

Conceived by three classmates from Boston College in 2011, Drizly is unlike any existing or rival system for delivering beer, wine and liquor.  Drizly gives consumers the ultimate convenience of swiping their way to a fast and responsible on-demand delivery experience from their iPhone. Furthermore, the company’s turnkey solutions provide retail stores a simple, secure way to offer convenient, and responsible on-demand liquor delivery.

MOBILE LIFESTYLE APPS ARE CHANGING THE WAY WE LIVE

Whether it was Uber in the world of taxi and black car service; Open Table for convenient dining reservations; or Hotel Tonight in last-minute hotel accommodations, today’s game-changing mobile lifestyle applications are expertly servicing a consumer that is on-the-go, demands convenience and value, and is constantly shortening the distance to their world with a smartphone.  Drizly is a first-of-its-kind app designed for this consumer, creating the most convenient and responsible connection to having beer, wine and liquor delivered.

“Drizly is the Amazon.com for alcohol,” said Nick Rellas, founder and CEO of Drizly.  “The liquor store experience hasn’t evolved since Prohibition ended in 1933.  A tiny fraction of $83 billion in liquor store revenue comes from deliveries.  That’s because liquor delivery has been terribly inconvenient for the consumer and a hassle for the stores.  Now, Drizly gives consumers the convenience of getting alcohol delivered quickly and responsibly.”

“It is exciting to see a team of young entrepreneurs on the East Coast develop a mobile lifestyle app that fills a huge need within a complex, multi-billion dollar industry,” said Walt Doyle, a Drizly investor and the former CEO of WHERE Inc. and now a venture partner at Highland Capital Partners.  “We believe Drizly is poised to fundamentally change the behavior of 225 million Americans who can legally buy alcohol, as well as the three-tier system that services them.”

Consumers of legal drinking age simply download the app to their iPhone (Android coming soon).  With a few taps of the finger, the consumer’s favorite beer, wine or liquor is on its way, typically within 30 minutes.  Delivery drivers then authenticate and validate IDs using Drizly technology.

“Pernod Ricard is actively exploring new platforms that create value for our consumers, and Drizly represents a unique path-to-purchase opportunity for wine and spirits shoppers,” said Tim Murphy, vice president, digital and media at Pernod Ricard.  “We are excited to work with the team at Drizly as they explore and create new shopper propositions through this technology.”