Based in Washington, Kramer’s interest in blades began when he was working as a chef and was trying to find out how to keep his knives sharp. Ever since, he has been devoted to learning all he can about the creation of excellent knives. Kramer is a Master Bladesmith and all of his knives are made by hand in his shop. 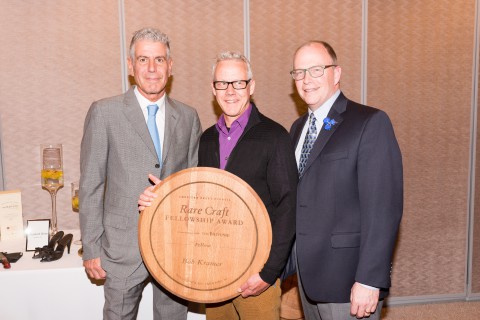 The partnership between The Balvenie, the world’s most handcrafted single malt Scotch whisky and Bourdain involves a multi-faceted approach to celebrating rare craftsmanship and sees him taking a leading role in the selection of the 2015 and 2016 Fellows for the Rare Craft Fellowship Awards. The award, presented annually, recognizes one Fellow and several finalists for their recognition and support of contributions to the maintenance and revival of traditional or rare crafts in America.

To be considered for the Fellowship, individuals must demonstrate a contribution to the preservation of traditional and rare craft techniques, processes, or products and meet a quality criterion. Bourdain served as lead juror for the selection process where hundreds were vetted and four were selected as finalists. About serving as a juror for this selection process, Bourdain said, “Certainly, the process of choosing a winner was gratifying for me. When you see all the nominees; artisans who choose to do things the old school slow way, it’s exciting to know there are people who are still devoted to the quality of a product. We saw many true craftsmen throughout this process and the Fellowship winner, Bob Kramer, to me, exemplified true artisanship with the dedication to his craft.”

As the Fellow, Kramer will receive an exclusive trip to Scotland and a $10,000 endowment to go towards materials and continuing his craft. The two-week long trip to Scotland will provide Kramer with an opportunity to spend time at the historic Balvenie Distillery, apprenticing under a local craftsman of his choosing along with the opportunity to learn more about the traditional crafts of whisky making. Kramer will also receive the rare opportunity to work with legendary Malt Master, David Stewart. The other finalists received a $5,000 endowment and a trip to New York City where they showcased their work at the awards luncheon.

Information on the additional finalists can be found below:

• Elizabeth Brim | Blacksmith, Penland, NC – Elizabeth Brim received her MFA in printmaking and was a professor of ceramics before she began studying metals and blacksmithing. She is currently an instructor at Penland School of Crafts and her work is noted for the creation of traditionally feminine objects and accoutrements in iron.

• Mark Hewitt | Ceramist, Pittsboro, NC – Born and raised in Stoke-on-Trent, Mark came from a ceramics family and decided to become a studio potter in college. He apprenticed in England and Connecticut, moved to Pittsboro in 1983 to open a pottery, and currently serves as President of the Board of Directors at the North Carolina Pottery Center.

• Mary Jackson | Basket Weaver, Charleston, SC – Born in 1945 in Mount Pleasant, South Carolina, Mary practices basket weaving techniques passed down through her family for generations. She started working full-time as an artist in 1973 by making baskets from sweet grass, a plant that is indigenous to South Carolina.

The Balvenie is a unique range of single malts created by David Stewart, The Balvenie Malt Master, who celebrated his 50th year at the distillery in 2012. Each has a very individual taste, but each is rich, luxuriously smooth and underpinned by the distinctively honeyed character of The Balvenie. The Balvenie is dedicated to the five rare crafts that are used to create The Balvenie’s distinctive taste. It is the only distillery that still grows its own barley, uses traditional floor maltings and keeps both coppersmiths and coopers on site – making The Balvenie the most handcrafted of malts. The Balvenie Single Malt Scotch Whisky is produced by William Grant & Sons Ltd, an award-winning independent family-owned distiller founded by William Grant in 1886 and today run by his direct descendants.