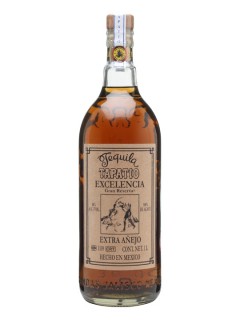 (St. Helena, CA) February 25, 2015 – Charbay Distillers, U.S. Importer of Tequila Tapatio, announces the discovery that the rare release ‘Excelencia’ Gran Reservas (Extra Añejo) is older than initially understood. In fact, it is probably one of the oldest Tequilas available on the market.

During a recent casual conversation between Charbay’s Master Distiller Marko Karakasevic and Tequila Tapatio’s owner/Master Distiller Carlos Camarena, it came to light that Excelencia, acknowledged as an Extra Añejo, was distilled in 1996.

“All of the Excelencia that has reached the market has been from the same batch, distilled in 1996, then aged for 4 years, then stored for over 13 years in glass 5 liter jars,” clarified Carlos Camarena.

“I distilled this Tequila almost 20 years ago. I didn’t make any rules for when (or if) I would release it,” said Camarena. “For years we have being using it for blending. It was upon much persistence of customers who said that it was ‘excellent’ that we decided to release some under the name ‘Excelencia’ as-is.”

Tequila Tapatio is made from 100% estate-grown Blue agaves that are hand-selected for ripeness and slow-baked for four days. After being shredded and run through a modified sugar cane mill for de-juicing, the agave ‘Mosto’ is fermented in small wooden fermenters using the family’s proprietary 75 year-old wild yeast culture and double-distilled in small (25-90 gallon) copper ‘Alambiques Mexicanos’ pot stills.

“Watching Excelencia change over time is my special passion,” explained Camarena. “Now the flavors are so intense, well balanced, round and unique. I am pleased to be able to offer the very limited number of bottles to people in the U.S., Mexico and UK markets who love rare Tequilas.”

A second batch of Excelencia, distilled in 2001, is expected to be releases mid-2015. This second batch (approximately 500 cases) was aged for 4.5 years, then stored in stainless steel under the influence of natural oxidation.

Tapatio is the 75 year-old personal brand of Carlos Camarena, owner and Master Distiller of La Alteña Distillery in the Arandas region of Jalisco, Mexico.

Well-known in Mexico, Tapatio has a cult-like status with Tequila aficionados outside of Mexico, who have been making the trek to La Alteña Distillery for many years to see this ‘Old World’ distillery that uses methods that are disappearing in modern Tequilas.

La Alteña Distillery is known in the U.S. market for El Tesoro, Tequila Ocho and other custom distillations.

Tapatio is a Mexican term for ‘someone from Guadalajara’ (no relation to the hot sauce). Since 1937, the Camarena Family has been distilling Tapatio Tequila from 100% estate-grown blue agaves grown in the Arandas highlands.

Tapatio was voted by bartenders as the top Tequila (separate category from mescal) in the “World’s 50 Best Bar Brands” (2015) report published by Drinks International.

A strong bond formed between two distilling families, Charbay’s Miles and Marko Karakasevic and Tequila icon Carlos Camarena, over several years of visits to Arandas during which Miles and Marko distilled Charbay’s Tequila Blanco. (They are thought to be the first American distillers to distill their own Tequila.)

Charbay Distillers became the exclusive U.S. Importer, launching the 75 year-old brand of Tequila Tapatio in the United States in 2012.

Tequila Tapatio Reposado – aged for 8 months in aged oak barrels to bring a hint of sweetness from the wood, without overpowering the spicy agave flavor. CA SRP $44 (1 Liter) 40% abv

Charbay® is owned and operated by the Karakasevic family. Founder, 12th generation Master Winemaker & Grand Master Distiller Miles Karakasevic, and son, Marko Karakasevic (13th Generation Master Distiller), produce award-winning small-batch spirits distilled in their classical Alambic Charentais Pot Still including whiskey, brandy, rum and liqueurs, along with whole, fresh-fruit flavored vodkas. They are the first U.S. distillers to personally/physically distill their own Tequila in Mexico. This family-run business also produces wines, aperitifs and ports made with selections of their 30-year-old library of bra’ndies. Tours of their Napa Valley Still House and Winery are available by appointment. Call 707-963-9327.