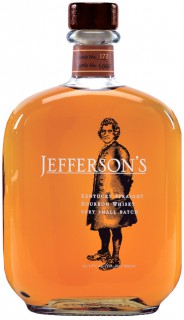 NEW YORK, April 1, 2015 /PRNewswire/ — Esquire and Jefferson’s Bourbon today announced the launch of their first ever collaboration: The Manhattan: Barrel Finished Cocktail. Crafted with the editors of Esquire, this new pre-batched cocktail will be available at select retailers nationwide beginning April 1, 2015.

The new Esquire & Jefferson’s Manhattan: Barrel Finished Cocktail was conceptualized in 2013 by Esquire‘s Editor-in-Chief David Granger and Jefferson’s Bourbon founder Trey Zoeller, in an effort to provide bourbon enthusiasts with a barrel-finished bottled cocktail that enhances the experience of enjoying a classic. In search of delicious, oaky notes and a well-balanced flavor profile, Granger and Zoeller (aided by various Esquire staffers) tested dozens of recipes together until they narrowed down the options to just three recipes. Those three options were then aged for 90 days in bourbon barrels until just one stood out as a superiorManhattan. The finished product is comprised of six-year-old bourbon – 125 proof cut down to 82.3 – both sweet and dry vermouth, and barrel-aged, spiced cherry bitters. Enjoy it as you would any Manhattan: on the rocks or stirred and strained over ice.

“Esquire covers the wide-ranging interests of men and one of our primary passion points is drinking and the culture of drinking,” saidDavid Granger, editor-in-chief of Esquire. “It’s been a joy working with Trey on finally putting our considerable drinking experience to some productive use.  (It was also good to drink lots of his whiskey). And it’s particularly gratifying that our distinctive version of the classic cocktail tastes so damn good.”

The expertly crafted cocktail in a bottle was created for the modern man who appreciates the experience of a quality drink along with the ease of a pre-bottled cocktail.

“What I enjoyed most about making this Manhattan with Esquire was the collaborative process of creating a well-rounded cocktail that elevated the typical bourbon drinking experience,” said Trey Zoeller. “It took us over two years of experimentation and communication to hone in on a drink we’ve always wanted at our home bar but was never easily available, and we were finally able to create something that is both innovative and accessible.”

This is a joint partnership between Esquire, Jefferson’s and Hearst Brand Development. The cocktail collection will be available at select venues and retail locations both in-store and online nationwide.

ABOUT JEFFERSON’S BOURBON
Jefferson’s Bourbon is a collection of bourbons made in ridiculously small batches, which was founded in 1997 by Trey Zoeller and his father Chet, a famed bourbon author and historian. The two seek out new and aged barrels of bourbon from established distilleries that have perfected distilling over hundreds of years. Then they do some old-fashioned experimenting, building balance and adding complexity through different selection, agitation and environmental processes until they find the taste Jefferson’s is now known for. Trey compares his process to nature vs. nurture – the distilled product represents the bourbon in its natural state which is then nurtured, or manipulated, by Trey to enhance the flavors, maturation and quality of the finished product.  The Jefferson’s Bourbon portfolio includes Jefferson’s, Jefferson’s Reserve, Jefferson’s Presidential Select, Jefferson’s Chef’s Collaboration, Jefferson’s Ocean: Aged at Sea and Jefferson’s Esquire Barrel Finished Manhattan. To see the whole Jefferson’s portfolio and learn more about upcoming releases, please visit www.jeffersonsbourbon.com.

ABOUT ESQUIRE
Esquire (www.esquire.com), published by Hearst Magazines, is the most-honored monthly magazine in America. Over the past 16 years, it has won a total of 16 National Magazine Awards. Its Web site and e-reader applications have been similarly honored—Esquirewon the first-ever National Magazine Award for iPad applications. In addition to its U.S. flagship, Esquire publishes 27 editions around the world. Hearst Magazines is a unit of Hearst Corporation (www.hearst.com), one of the nation’s largest diversified media and information companies. With 21 titles in the U.S., Hearst is the leading publisher of monthly magazines in terms of total paid circulation (AAM 2H 2014), reaching nearly 81 million readers in print (Fall 2014 MRI gfk) and nearly 44 million site visitors each month (comScore). In addition, the company publishes close to 300 editions around the world. Hearst Magazines Digital Media includes 18 websites for brands such as Cosmopolitan, Popular Mechanics, ELLE, ELLE DECOR, Esquire, Good Housekeeping, Marie Claire andSeventeen, as well as digital-only sites such as Delish.com. Hearst Magazines has published more than 150 apps and digital editions for the iOS and Android platforms. The company also includes iCrossing, a global, full-service digital marketing agency. Follow Esquireon Twitter at @Esquiremag.